Film review: Is Chasing Ice the next Inconvenient Truth?

Chasing Ice got straight to the point in its opening sequence, combining startling images of extreme weather events with strong anti climate change reporting in the US media. This story is not, as the title might suggest, entirely focused on the accelerating melting of the Arctic ice sheet, but is also a tale of the trials, tribulations and creative vision of National Geographic photographer James Balog who, in his time, was himself a climate sceptic.

We first meet Balog, sitting on a rock by an Icelandic glacier (large parts of the film were filmed in Iceland), talking about the journey we are about to witness, why he believes the climate fight is so important, and why he, in his own words, is ‘doing the only thing he knows how to do’ to help – documenting the story in photos.

James Balog hangs off cliff by Columbia Glacier, Alaska to install time-lapse camera.
He talks about why he set up the ‘Extreme Ice Survey’, which involved placing cameras next to glaciers in Iceland, Greenland and Alaska to document their rapid retreat. We witness his heartbreaking discovery when he returns to some cameras 6 months into the project only to discover that due to a computer error a lot of them didn’t work. He subsequently had to dismantle them all, take them back to the US, fix them up again and start all over establishing them in these challenging and remote locations.

When the technology finally did work, the results were amazingly terrifying; showing rapid glacier retreats taking place at unprecedented rates through carefully shot and beautifully executed time lapse photography. His team also captured the longest ever recorded glacier calving, that went on for a full 75 minutes.

The 75 minute calving of the glacier is definitely the highlight of the film; that particular sequence of film is nature in movement of the very highest calibre and will surely go down in history as a sequence outstanding nature documentary filmmaking.

Outstanding nature footage and photography aside however, any climate savvy person watching the film, will otherwise find it somewhat aged. The most up to date footage of extreme weather events depicted in the film, comes in the shape of imagery from Hurricane Irene – a powerful storm in its day but one that has been completely dwarfed by the events of this year, Hurricane Sandy in particular. Other outdated footage included Balog campaigning at the 2009 COP15 climate summit, which is now three years old.

Another issue with the film, is the ‘Made in America’ cheesy sequence in which Balog heroically combats his ailing knees to make his way up a glacier on crutches. This sequence has been cited by many reviewers alike, environmentalists or otherwise, as particularly over the top. However I’m personally glad it’s there; not because I don’t find it contrived because I do, but because we need to embrace attempts like this to communicate the climate debate to mass audiences, and accept that adding a cheesy personal twist here and there is precisely one such technique. Mass audiences who don’t find the science compelling enough need human interest angles.

And even though the extreme weather event footage is out of date, I applaud its use. Given the year that the US has had, this is the kind film that will encourage a renewed interest in climate change amongst the American people, and who knows it might just have a similar effect to the one that ‘An Inconvenient Truth’ had in 2007.

Chasing Ice is showing in UK cinemas until 18th April 2013 and listings here for USA & Canada.

Book review of ‘Enough: Breaking free from the world of more’ by John Naish 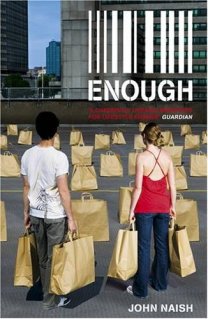 Review: A fascinating insight into the psychology, sociology and consequences of rampant consumerism by the health lifestyle correspondent of The Times, John Naish. Naish walks us through the early days of human evolution, when our greed and competitiveness gave us an advantageous evolutionary edge, to the modern day when it seems, ultimately, to be hampering our wellbeing due to its toll on our wallet, lifestyles and psychology.  The book contains fascinating statistics and tit bits of useful information for armchair environmentalists like me, to chew on, ponder and regurgitate to interested souls. A quick, easy and informative read for anyone intrigued by the ins and outs of the consumer plague that seems to be afflicting our curious species.
Score: 3.5 out of 5!

Book review of ‘How bad are bananas: The carbon footprint of everything’ by Mike Berners-Lee

Book: How bad are bananas: The carbon footprint of everything
Author: Mike Berners-Lee

Review: At the start of this great book, the author explains that he’s not set out to write a preachy polemic about the merits of a low carbon lifestyle, however instead is set on myth-busting several misconceptions about the ‘carbon cost’ of everyday activities in order that we can all enjoy a genuinely informed debate on the issue. I think he succeeds beautifully at this and has produced a hugely well researched reference book which I personally learnt a great deal from. Who knew for example that synthetic materials are far preferable in carbon terms to natural fibres in clothing, and that the average plastic bag actually has a significantly lower ‘carbon debt’ than a paper one. Readers are likely to enjoy the light, humorous tone of the book, whilst equally appreciating the meaningful and important statistics it shares. Definitely an informative, educational and enjoyable read for green geeks and bookworms alike.

Review: Even though ‘Eaarth’ is already slightly out of date, with environmental statistics, science and technological advances moving so fast, it’s a fascinating book which paints a detailed and compelling picture of our pressing macro and micro climate challenges and potential solutions, in places ranging from Vermont where McKibben lives to multilateral summits such as the COPs and Rios of the world. As an American journalist, author and campaigner he can be forgiven for writing for a predominantly American audience, but I do confess to feeling a little frustrated about the lack of European references. I felt there was plenty of scope for more details about the Transition Town movement in the UK, and some of the many pioneering and successful renewables community ownership schemes in Scandinavia and Germany for example. However, he writes well and has definitely done his sociological and scientific research; overall I came away frightened, enlightened and even more determined to make a worthwhile contribution to the sustainable future we must all forge from here on.

Score: Four stars out of five!

Like Loading...
A greener life, a greener world is a progressive environmental news site with a focus on climate change and all the areas it impacts. We produce news, opinions, analysis, and reflections and have a host of contributors across the world.