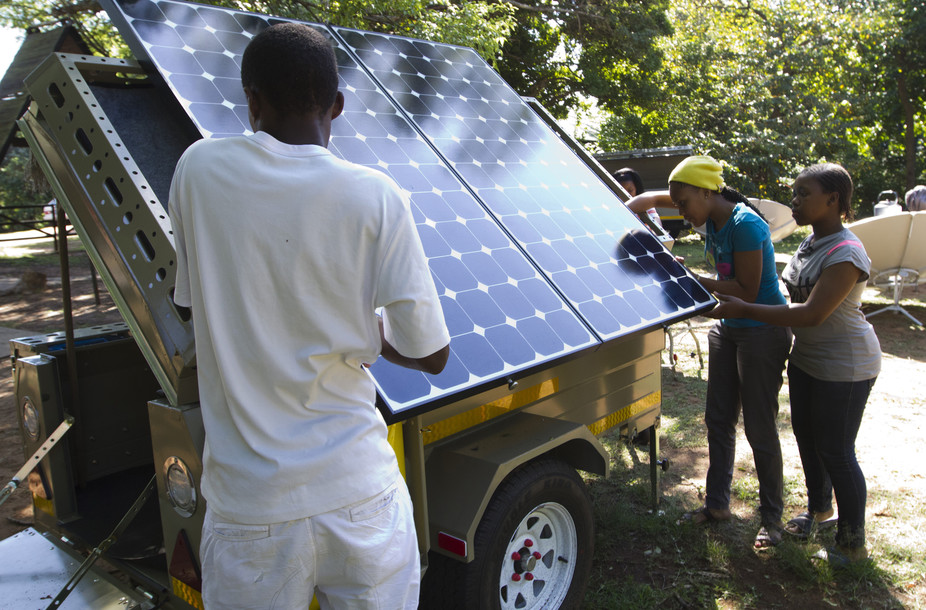 The region accounts for only 9% of the global installed capacity of photo-voltaics (PV) which convert light into electricity using semi-conducting materials. The solar PV technology power generation rate rose from 1% in 2010 to just between 3% and 4% in 2013.
This is despite the fact that Africa has the best solar resource in the world. Most countries on the African continent receive between 4 – 6 kWh/m2/day in most months of the year. This means that in a day, a square metre of solar panel can generate 4 to 6 kilowatt units of electricity. In simple terms, it could power 400 – 600 10-watt light bulbs for one hour.
In the past, the poor diffusion of modern energy technologies in developing countries, especially in rural areas, was attributed to poverty and ignorance. But recent market dynamics challenge this theory. Mobile telephony technologies, for example, have had huge success in market penetration in the same environments and under even tougher conditions.
So what is holding the solar energy sector back?
There is a range of factors that affect players at every level of the value chain – from the investors to the end user.

A study carried out in Kenya sheds light on what is holding solar back. It looked at the choice of lighting fuel in households, education levels and the household heads’ income brackets. It also examined the average household expenditure, ownership of the dwelling, potential grid access, rural/urban setting of the household and the prevalence of solar home systems in the area.
The findings of theat study, corroborated by others, identifies four categories that can be seen to affect the growth of the solar energy industry in Africa. These are: an enabling environment, access to finance, awareness and access to technical support services.
An enabling environment refers to the conditions in a country or region that support the growth of a particular industry. It is mostly a function of the national government and regulatory bodies which can either be a hindrance or be helpful.
The “Kenya Least Cost Power Development Plan” provides a good example of how a regulatory body can fail to be of assistance. In its latest plan the country’s energy commission makes no provision for the generation of electricity from solar energy resources at any point in the projected 20-year period. The decision to omit solar PV was based on previous assumptions that labelled this technology as too expensive, which is not the case today.
This plan limits solar energy applications to solar home systems, solar water heating and other off-grid uses in rural areas. These are far from the opportunities that large PV systems could provide when connected to the grid, generating cheaper electricity.
On the other hand, a positive example is the Kenyan government’s VAT exemption which applies to all solar PV equipment such as solar panels, batteries and controllers. This reduces the cost of PV systems by 16% and increases the chances that they’ll be adopted.

Access to finance has been identified as the most significant challenge to the penetration of solar energy technology in Africa. The effects of limited financing options are felt by all players from manufacturers to importers, distributors, dealers and end users.
Basically, local banks have high interest loans – between 15%-25% – making it very expensive to buy a solar system. All the savings obtained in not paying the utility are effectively “eaten” by the banks.
Meanwhile foreign investors, who could bring in more affordable interest rates, are wary of entering the market because of the perceived high risk of investing in developing countries.

Consumer education is another key challenge, particularly in rural areas. Awareness about available energy options and their benefits needs to be increased. In addition, the hazards involved with using fossil fuels such as diesel and paraffin also need to be brought to people’s attention.
The marketing of solar products and other modern energy technologies to end users has also been limited. This is partly because there is a shortage of entrepreneurial capacity in the energy sector, particularly in rural areas.
Finally there is the issue of substandard products in the market which result in users not trusting the technology. A study on LED torches in East Africa found that 90% of the users experienced quality related problems during the six-month study period.

End users having easy access to technical assistance is another key factor. The presence of technicians well versed in troubleshooting, repair and maintenance would increase consumers’ trust. But the fact that consumers live far apart, coupled with their low buying power, makes the notion of setting up service centres in the distribution regions unsustainable.
There are a few interventions that could mitigate some of these challenges. These include:
To close on a very positive note: all indicators point towards a massive adoption of solar technology in the developing world. All the above mentioned difficulties can be overcome as awareness increases, training is made more available, real and perceived financial risks decrease and the cost of solar technology becomes affordable. In a poetic manner we can say: you may pluck one flower, two flowers and three but you can never stop the coming of Spring.
Prof. Izael Pereira Da Silva has a PhD in Power Systems Engineering from the University of Sao Paulo (Brazil).
First published at