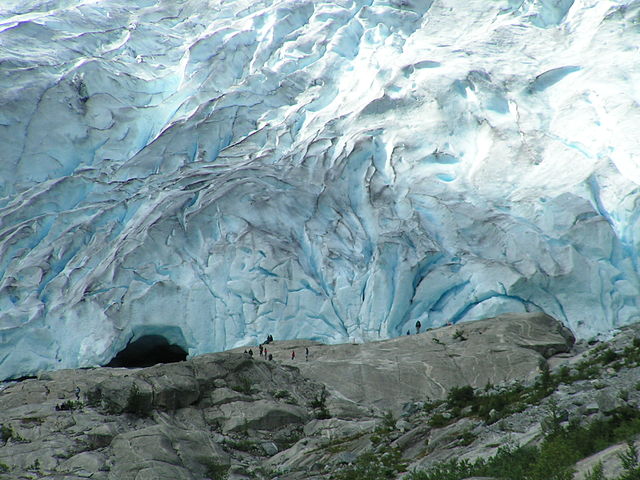 The Nigardsbreen glacier used to be one of Norway’s most accessible, but climate change has altered its terrain. Photo credit: Pjacklam – Own work, CC BY 2.5 via Wikimedia

‘They want to see it before it disappears’

Once one of Norway’s most accessible glaciers, the Nigardsbreen has receded to reveal a difficult trek across hard slabs of rock. Instead of 50 tourists at a time, guides now take as few as six people, even though business couldn’t be better.

Steinar Bruheim, a guide who’s led tours across glaciers for over 30 years, knows why tourists flock to Norway’s rural, western countryside in the summer.

“They want to see it before it disappears,” Bruheim said.

The Nigarsbreen, like over 90% of the world’s glaciers, is melting. And while the planet is experiencing record temperatures, global travel and tourism, which researchers believe represent at least 8% of carbon emissions, couldn’t be healthier. In 2017, there were 1.32 billion tourist arrivals internationally, with Norway earning almost $19 billion from tourism representing 4.2% of the country’s gross domestic product, according to Innovation Norway, a government entity focusing on business growth.

Norway, like most countries in Western Europe, is experiencing record numbers of tourists, especially during the peak summer months—more than half of all overnight stays traditionally happen from May to August. And most of those tourists, according to Innovation Norway, come to see the fjords and the famous Northern Lights in northern Norway.

That influx of tourists is putting a strain on its natural wonders, especially glaciers.

“They are part of the problem”

In the late 1980s and ’90s, Bruheim’s business mostly came from German and Dutch tourists. But with help from a falling krone, Norway’s currency, and a rise in overall international travel, Norway’s tourism industry has exploded.

The U.S. is Norway’s third most popular market, behind Germany and Sweden. Between 2012 and 2018, the number of U.S. travelers staying in Norway’s hotel rooms, cabins and campsites grew 168%, with 815,656 overnight stays in 2018. (In Norway, hotels must disclose the number of beds sold each night as well as their guests’ country of residence.)

This past June, right before the peak of Norway’s travel season in July, U.S. tourists accounted for 151,889 bed nights, up 24% from the previous year.

While guides including Bruheim have profited from the increase—especially among American, Chinese and Indian tourists—it comes with a price for the environment. A direct flight from New York City to Oslo, Norway produces about 0.87 metric tons of CO2, according to an emission calculator from Carbon Footprint, a U.K.-based green energy consultancy. A direct flight from Beijing to Oslo produces 1.89 metric tons.

“The longer they travel, the faster the glacier melts,” Bruheim said. “They are part of the problem.”

“We don’t get enough [snow] to sustain the glacier”

Carbon emissions, which are released when fossil fuels are burned, trap heat within the atmosphere and are the cause of man-made global warming, according to 97% of climate scientists. In 2013, a NASA-led team of scientists put the start of the current massive glacial retreat at the mid-1800s, specifically linked to the burning of coal at the beginning of the Industrial Revolution.

Pål Gran Kielland, a geographer and educator at the Norwegian Glacier Museum, equates the lifecycle of a glacier to a business. Snow is like profit, he said: As long as snowfall continues to outpace the rate at which a glacier is melting, the glacier will continue to “stay in business.”

“Because it’s getting warmer, the business is going into the red,” Kielland said. “We don’t get enough to sustain the glacier.”

The Nigardbreen hasn’t grown since 2000, despite a decade of heavy precipitation in the ’90s that led to glacial growth along Norway’s coast, according to the Norwegian Water Resources and Energy Directorate. Overall summer temperatures have remained consistent and have steadily increased.

First recorded in 1903, the Nigardsbreen has shrunk by 2,860 meters since then—that’s roughly 26 football fields. In 2018, the glacier receded another 81 meters.

As Nigardsbreen and other glaciers recede, they get farther from the historic trailheads and outlets used by guides and tourists.

“It’s more demanding for the tourists,” said Sigbjørn Veslegard, a guide for the mountaineering-focused company Norgesguidene. “You need to be a little bit of a skilled hiker to get onto the ice. Before, it was a fairly easy hike, but now it’s too hard and you can get lost.”

Tourism officials have begun grappling with how to promote year-round tourism, as well as drawing people into new regions and highlighting attractions beyond its glaciers.

Up until two years ago, Visit Norway, the country’s tourism bureau, and its media buyer Mediacom used to cast a wide net encompassing several distribution partners and platforms like National Geographic and the travel site Matador Network.

They’d also look for partnerships. Norway partnered with Disney Studios before the release of the 2013 box office behemoth Frozen. In exchange for promoting the movie during its theatrical release, Visit Norway could use the characters and animation in its own campaigns, showing the natural beauty that inspired the filmmakers and promoting the country as a family-friendly destination.

Now, Visit Norway has changed its approach. With a new strategy called “All of Norway, All Year Round,” the agency is leaning heavily on targeting specific audiences through Facebook, with video content and blog posts produced by the brand’s in-house creative team.

“The reach is smaller when you go that niche,” said Beate Christin Gran, a marketer at Innovation Norway. “But that gives us the ability to be more personal.”

Visit Norway’s website emphasizes off-season activities with content like “10 reasons to go to Norway in autumn” and highlighting the art-focused attractions of the Hadeland region in southeastern Norway.

“We want to make sure we spread the traffic,” said Hege Vibeke Barnes, a director at Innovation Norway. “You don’t have to see the fjords in July—it’s beautiful in September. Just put on a jacket.”

Glacier guides are not worried—yet

While it remains to be seen if Norway’s marketing shift will disperse tourism throughout the year, the guides are proceeding with business as usual while also planning for a future when the glaciers are no longer able to handle human tours.

“If it’s going to recede in the coming years, then we have to think of other ways to guide the tours to maintain tourism in our rural area. It’s important to the community,” said Bruheim, who suggested that instead of guiding on the ice, his business will look into leading hikes in the more mountainous parts of the country.

Bruheim also recommended the country limit its marketing to only Europe to reduce the number of long-haul flights, limiting the tourism industry’s carbon footprint.

Veslegard generally agrees that international travel could be causing more harm than good. He is also aware of the irony of his work: providing tours of a glacier that’s dying because of the visitors he brings there.

“It’s my daily business to have tourists,” Veslegard said. “[The glacier is] not going to melt in our lifetime, but maybe we won’t be able to do day tours on the ice in the next 10 years. That is very likely.”

This story originally appeared in ADWEEK. It is republished here as part of A greener life a greener world’s partnership with Covering Climate Now, a global collaboration of more than 350 news outlets to strengthen coverage of the climate story.