Live blog: green issues of the US election on election day!

Good morning to all Americans and good afternoon to Europeans – welcome to this live blog which will be with you throughout the day as America goes to the polls. This blog entirely focus on the green issues that were and were not brough up in the election campaign, and the green implications of the outcome of today’s election.

Three months ago I set out to speculate what green focuses the 2012 US election could focus. Today the day the American people go to the pools I can summarize that some of them I could predict and others I could absolutely not.

It was widely anticipated that Mitt Romney would win the Republican convention and run against Obama. It was also widely anticipated that Romney would do everything in his power to mock Obama’s green ambitions and give them a negative economic spin. Both these things happened and he even went on to mock the whole affair at the Republican convention when he said ”Four years ago Obama promised to slow the rise of the oceans and heal the planet”, followed by an ironic laugh echoed by the crowd, continuing “My promise is to help you and your family”.

What could not have been predicted however, was that the US was going to be hit by a severely destructive natural disaster in the shape of superstorm Hurricane Sandy, which with a bang would push the issue of climate change back into foreground of the election perfectly summed up by New York City Mayor Michael Bloomberg ”Our climate is changing and while the increase in extreme weather we have experienced in New York City and around the world may or may not be the result of it, the risk that it might be-given this weekds devastation-should compell all leaders to take immediate action. We need leadership from the White House.”

GMT 12:57: Bloomberg Business Week who last week brought climate change on the agenda with it’s provocative cover ‘It’s Global Warming, Stupid’, published yesterday a climate change to do list for the next President with the key points of: Putting a price on carbon, cut non C02 greenhouse gas emissions, promote clean energy and energy effciency and use the clean air act.

GMT 15:38: You could be forgiven for thinking that Obama and Romney are the only ones running for president. But for the greens Jill Stein, to rank up some media coverage she recently labbelled Obama a climate denier, and last week she was arrested for brining food to Keystone XL protesters. Today this photo was tweeted of her: 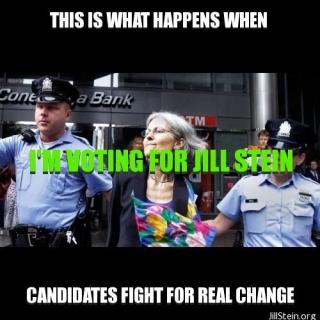 GMT 15:45: Actor Ian Sommerhalder and start of Lost and the Vampire Diaries tweeted: ”10 Big differences between Romney and Obama (and Democrats and Republicans)” His ten reasons can be found here but it’s worth noting that number one of that list were ”The Future of Planet Earth.
President Obama and Democrats believe in Climate Change and want the EPA to regulate and reduce “greenhouse gases”. Romney and Republicans don’t”.

GMT 17:00: Global campaign organisation Avaaz have looked at how the world will look with Romney as president and on the subject on climate change it notes that Romney doesn’t think the US government should do anything about climate change and his position has shifted several times.

GMT 18:50: Greenpeace are joining the party too by posting below picture and stating: ”A strong
reminder on election day. 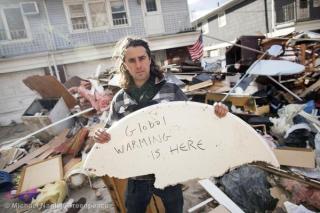 GMT 22:40: In about half an hour the first exit polls will close.

GMT 23.15: We must not forget that it’s not just about the Presidential election, seats also up for grabs at the Senate and House of Representatives. In the senate it’s 33 out of 100 seats and in the House it’s all 435 seats. Obama has a majority of three seats in the house and the Republicans a majority of 25 seats in the House. It was the very House that has blocked many of Obama’s proposed climate legislation laws including the cap in trade law.

GMT 23:25: Ohio the crucial swing state that by many is predicted to be the title decider is almost even I hear after the first exit poll.

GMT 01:45: Did Hurricane Sandy have an effect on New Jersey voters? Well Obama has won the state, based on that one can speculate if Obama’s handling of the storm which have been praised by the states Republican Governor Chris Christie.

GMT 01:47: Interesting stats from Ohio, Obama is ahead on energy issues which is interesting as the state is a heavy coal producer and his legislation of the industry has proved unpopular.

GMT 01:53: Latest exit pools from the swing states shows that Florida is neck and neck with majority keep switching between Obama and Romney and it’s too early to call. In the crucial Ohio Obama currently has a steady lead of 57.8% against 41.1%. Earlier on BBC new an Obama voter from Ohio stated his importance of Obama rescuing the automobile industry and creating clean energy jobs.

GMT 02:00: Bill McKibben from 350.org just tweeted: ”15% of voters said response to Sandy most impt–i.e., despite the silence, climate is playing a serious role in the outcom” Followed by the Guardians US environment correspondent Suzanne Goldenberg: ”MSNBC: 42% of voters considered hurricane response important or most important factor in their vote”.

GMT 03:55: The Democrats seem to be holding on to the Senate and the Republicans to the House. Which mean that if Obama were to be re-elected today’s situation would be unchanged and there would be more pressure on the House and the Senate to work together. 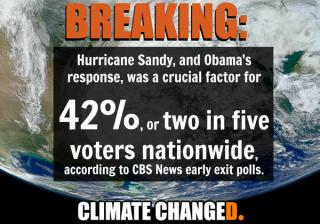 GMT 04:25: Iowa despite being a Republican run state, has a large proportion of renewable energy with wind power a large part of the economy. Romney wanted to end the wind tax break that many experts saw as a killer for the wind power industry in the US.

GMT 04:30: BARACK OBAMA HAS BEEN RE-ELECTED AS PRESIDENT.

GMT 04:40: And Climate Silence ”….now it’s up to us to push, to shape and shake the ground for a climate change believing President to lead”

GMT 05:00: That’s all closing for the night or morning depending on your location.