Guest blog: How Far We Have Come 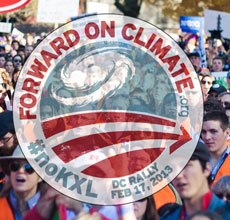 By Derek Leahy
”Before We Can Know Where We Are Going We Must First Understand Where We Have Come From” is one of those sayings you hear alot. Personally, I have no idea who said it but the concept seems to pop up in a lot of cultures around the world. The 40 000 people who rallied in Washington DC last Sunday (Feb. 17th) to encourage President Obama to reject the Keystone XL pipeline have got me thinking about where the tar sands movement has “come from.”
I think back to those cold and grey winter days in Berlin, Germany in 2010. At that time I was scribbling down ideas for the first International Stop the Tar Sands Day in whichever Berlin cafe peaked my curiosity that day. If someone walked into that cafe, sat down at my table, looked me in the face and told me in a little over a year (Jan, 20th, 2012) President Obama would reject the construction of an oil pipeline (right now is TransCanada’s second kick at the can in regards to Keystone XL) I would have laughed. My response would have been something like “nah man, you got it all wrong. The US does not say no to oil.”
Think ten years back.  It is 2003,  and Dr. John O’Connor has told the world that cancer rates are alarmingly high in communities downstream from the tar sands such as Fort Chipewyan . Could anyone back then imagine ten years later the will of the people in British Colombia would be so strong that it looks like no tar sands pipeline will ever be built in BC? Could the people of those downstream communities like Fort Chip actually imagine they would one day be the inspiration and at the centre of a tar sands movement that to date has seen actions on practically ever continent?
Go even further back. Go back to 1996 when the Canadian and Albertan governments came up with the famous yet meagre 1% royalty rate on tar sands projects (click here for current royalty rates. Royalty rates are meant to increase once all capital costs of a project are paid). The 1% royalty rate in combination with the high price of oil in the new millenium and some technological advances really got the tar sands boom going. Could anyone have imagined at that time a tar sands industry scrambling to find ways to export tar sands crude from landlocked Alberta or an Albertan government projecting budget deficits all because people were saying no to pipelines?
Maybe there were people in 2010, 2003, or 1996 who saw this all coming. Something like the tar sands that has no place in a low carbon future was inevitably going to come up against insurmountable roadblocks. Nonetheless, I still think it is important to recognize where the tar sands movement has come from. It gives the movement context. Once you understand the context then you can see the true beauty of events like the Forward On Climate rally or the Save the Fraser Declaration.
Before we approach the “tar sands tasks” of 2013 we should give ourselves a moment to think, reflect, and admire how far the tar sands movement has come. Our efforts this year could decide the fate of four pipelines (Trans-Mountain, Northern Gateway, Keystone XL, Line 9) and the EU Fuel Quality Directive (FQD). All five campaigns may not go our way, but if we look at the past we know it is not impossible. Besides, if the true key to stopping the tar sands is to create a international mass movement we are well on our way to reaching that objective. I can think of at least 40 000 people who probably agree with me.
This was first posted at Sierra Club Canada.

Derek grew up in the sleepy little town of Brooklin, Ontario in Canada. After his experience as a backpacker in Copenhagen, Denmark during the UN Climate Change Summit in 2009, Derek decided it was time he stood up for the planet. Shortly thereafter he created International Stop the Tar Sands Day (international rallies to raise awareness about the destructiveness of the tar sands)  and plans on continuing to raise awareness about the tar sands and the need to act upon climate change this decade in the years to come.