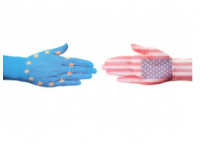 By guest contributor Derek Leahy
For five long years the federal government and the oil industry have lobbied against the European Union labeling oilsands (also called tar sands) bitumen as ‘dirty oil’ in its Fuel Quality Directive (FQD). A new report released yesterday reveals the recent involvement of the U.S. in the lobby offensive to keep the EU market open for bitumen exports has tipped the scales in favour of oilsands proponents.
“The sustained attacks by the U.S. and Canada on the European Union’s key legislation on transport fuel emissions seem to be paying off,” Fabian Flues of Friends of the Earth Europe, the author of the report, admits.
The report shows the EU Fuel Quality Directive, a piece of legislation designed to reduce global warming greenhouse gas (GHG) emissions in the EU’s transportation sector, is unlikely to acknowledge fuels from different sources of oil – conventional oil, oilsands, oil shale – have different carbon footprints. Instead all oils will more than likely be treated as having the same GHG emissions intensity ‘value’ in the Directive. This is exactly what Canada, the oil industy and now the U.S. have been pushing for.
“Europe is again failing to stand up effectively for its own climate policy,” Flues says.
Trade talks, not science, weakening the Fuel Quality Directive
The EU has not fallen for the federal government’s argument that bitumen produces only marginally more GHG emissions than conventional oil in extraction, processing, and use. A European Commission study found bitumen’s carbon footprint is between 12 – 40 per cent higher than conventional oil.
The report reveals trade, not science, is the cause of the EU backing off from implementing the Fuel Quality Directive as it was originally meant to be implemented. To reduce GHG emissions from transportation the Directive discourages transport fuel suppliers from selling fuels with high carbon footprints in the EU. Identifying which fuels have higher carbon footprints was meant to make things easier for fuel suppliers to reduce the GHG emissions output of their product.
“The delay and weakening of the European Fuel Quality Directive once again reveals that agreements like CETA (the Comprehensive Economic Trade Agreement) are less about trade and more about limiting the ability of governments to effectively regulate in the public interest,” Scott Harris, trade campaigner with the Council of Canadians, says.
Fuel Quality Directive subject of CETA talks
The report argues the U.S. and Canada are using their own ongoing trade negotiations with the EU to undermine the Fuel Quality Directive. Canada and the EU have consistently maintained their trade negotiations for the CETA and the Directive are two separate issues. The evidence indicates otherwise:
“The foreign policy think tank The Polish Insti­tute for International Affairs reported that the FQD had been raised in the CETA negotiations and there have been calls in Canada to suspend the negotiations until the high GHG value for tar sands has been resolved to Canadian satisfac­tion,” the report states.
“While other governments are trying to make communities safer, the Canadian government is using its political muscle to push things in the opposite direction so it can export high carbon tar sands oil as quickly as possible,” Mike Hudema, climate and energy campaigner with Greenpeace Canada, says.
“It’s astonishing that as we watch the fires spread in the Northwest Territories and the flood waters rise in the Prairies our government still isn’t getting the message – climate change is real and we need action immediately,” Hudema states.
The Globe and Mail reported as earlier as 2011 that anonymous sources had said Canada had threatened “to void the free trade deal” if the Fuel Quality Directive was implemented.
“Even before it is signed, CETA is being used to water down much-needed public policy. Imagine what will happen to regulations on both sides of the Atlantic if the deal is actually implemented,” Harris of the Council of Canadians says.
U.S. joins the lobby offensive
The U.S. in some ways has been more open about its lobbying against the Fuel Quality Directive. U.S. Trade Representative Michael Froman confirmed he “raised these issues [of the FQD implementation] with senior Commission officials on several occasions, including in the context of the Transatlantic Trade and Investment Partnerships (TTIP).” The TTIP is the trade agreement between the U.S. and the EU currently under negotiation.
European Commission documents obtained by Friends of the Earth Europe reveal the U.S.trade missions has “substantive concerns” with the Fuel Quality Directive singling out fuels produced from bitumen as having a higher carbon footprint than conventional oil. Like Canada and the oil industry, the U.S. wants all oil – regardless of GHG emissions – to be treated the same as conventional oil in the Directive.
It appears this new pressure from the U.S. is the straw breaking the camel’s back:

“[Media] reports claim that the system chosen by the Commission is one of averaging of all crudes – exactly what the U.S. mission had requested in its e-mail. If they are correct, the new FQD proposal will be considerably less effective in discouraging the import of highly climate damaging oil, such as tar sands. It might well be the case that the FQD is the first environmental casualty of the TTIP negotiations,” the report states.

Recently eleven members of U.S. Congress sent a letter to the US trade mission expressing their concerns “that official U.S. trade negotiations could undercut the EU’s commendable efforts to reduce carbon pollution.”
Image Credit: OpenEuropeBlog
This was first published on Desmog Canada.
Derek grew up in the sleepy little town of Brooklin, Ontario in Canada. After his experience as a backpacker in Copenhagen, Denmark during the UN Climate Change Summit in 2009, Derek decided it was time he stood up for the planet. Shortly thereafter he created International Stop the Tar Sands Day (international rallies to raise awareness about the destructiveness of the tar sands)  and plans on continuing to raise awareness about the tar sands and the need to act upon climate change this decade in the years to come.
More from Derek:

Is Canada putting all of its eggs in the oilsands basket?

Ontario be Warned – Importing ‘Fracked Gas’ is Not the Way To Go, Say Experts
The Ring of Fire: Ontario’s Mega Mining Project to be the “Next Fort McMurray”
The World Needs Zero Plastic Heroes