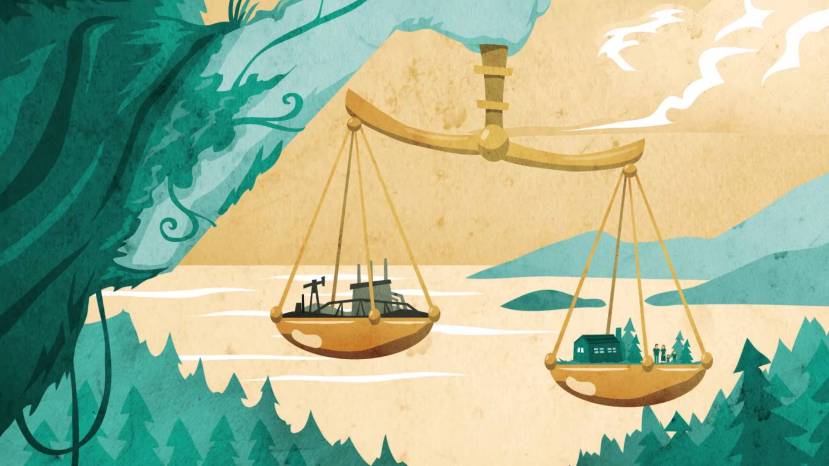 The abolition of slavery and women’s suffrage in the 19th century, followed by nations signing the Universal Declaration of Human Rights in 1948, mark an example of humanity’s ability for ethical shifts: a move away from systems based on entire sections of society – be them women, children or ethnic minorities – having no or limited rights. Injustice remains present today, but the change has meant that it is now recognised for what it is and generally condemned. Post war sentiment, efforts by active sectors of society to campaign for equality and justice, are a demonstration that values are not fixed in time but vary in tune with society.

One of the main issues of our time is that of environmental degradation, be it the loss of ecosystems and species diversity, climate change, plastic and air pollution. Because of this in the last ten years, it has become more strategically relevant to take steps to grant ecosystems and other species the highest legal protection within a rights-based framework. At a time when corporations are recognised legal ‘personhood’ as a way for them to access a multitude of rights, it is essential that nature, as well as communities, be granted similar status to be able to respond on similar grounds.

And it is happening. There are organisations of environmental lawyers such as West Coast Environmental Law in Canada and Community Environmental Development Fund in the US, that believe in the power of communities and people’s movements to foster change. They support through legal assistance and grassroots organizing those initiatives that aim at affirming the rights of humans, of communities, and those of nature through legal means.

In Ecuador and Bolivia, nature has already been granted rights. In 2008, Ecuador became the first country in the world to include Rights of Nature in its Constitution. In 2011, this resulted in two citizens being able to bring a case against the Provincial Government of Loja regarding a major development project that would have impacted the flow of the Vilcabamba River. The Court granted a Constitutional injunction in favor of nature, specifically the Vilcabamba River. Bolivia passed The Law of Mother Earth in 2010 to grant nature the right to: life, the diversity of life, water, clean air, equilibrium, restoration and pollution-free living. This was followed up in 2012 by the agreement on a Framework of Mother Earth and Holistic Development for Living Well. Common denominator for Bolivia and Ecuador is its indigenous population, strong in presence and politically influential. Their campaigning ensured that a belief system in which nature is ‘mother’ and as such sacred, got integrated, at least partly, in the legal system. This is particularly relevant given the dependency of both countries on foreign extraction industries such as mining, and the question, which still remains, of how to move away from such dependency. Economic interests are strong, yet having a legal framework can be the first step in support of indigenous efforts, and represents an alternative and challenging view to the neoliberal system.

More recently, specific ecosystems have gained legal protection. The Ganges and Yamuna rivers in India have been granted some of the legal rights associated with people. This means that harming them would have the same consequences as harming a person. The legislation was based on a similar case, the first of its kind, not long before won in New Zealand with the Whanganui river. Considered by the Māori tribe as an ancestor, after many years of pressure, the river finally attained similar legal status to a living entity. Both cases represent an important shift in perspective away from the ownership and management of a river as property. It is also based on the intrinsic value of the river as part of the Māori’s worldview, being that we should not assume humans to be superior to their surroundings. In practical terms, human guardians will speak on behalf of the rivers in any legal procedure.

Another aspect of legal means being utilised to achieve social and environmental protection has been seen in the activation of legal systems against government policy. In the Netherlands in 2013, a case was brought before the courts looking to sue the government for not setting high enough targets to reduce greenhouse gas emissions. The government inaction was proven to expose its own citizens to the imminent danger of climate change. The defense argued that the solution to the global climate crisis did not solely depend on the Dutch government, but this was dismissed by the court. In 2015 the Dutch government lost and was ordered to cut emissions by 25 percent. The precedent has led to similar cases being brought against other governments on emission targets. In Belgium, activists, film-makers and artists are arguing a similar case against their government, while in the USA 21 young citizens have succeeded in getting their case for failed climate action to trial in the previous administration – although they are now seeing it slowed by the current one. Lawsuits are not limited to emission targets either. In Norway, an alliance of activist groups is suing over the opening up of the Barents Sea for oil exploration. In South Africa and Austria, governments were told to reconsider plans for a coal-fired power station and to block Vienna’s airport expansion respectively. More recently, in the UK, environmental lawyers who recognise that EU legislation and monitoring is the backbone of environmental protection in the country, have set up a task force to ensure that no law is accidentally dropped in the transition due to Brexit, and are ready to defend it.

As more cases are won, more are likely to follow. Having a legal framework that protects nature as nature itself, may induce a similar ethical shift to those of the past. Economic interests are powerful, and with companies having a personhood to represent them in court, it may just be fair to grant similar recognition to ecosystems and species so that they have the legal means, if not the economic resources, to live on. In the end, it is down to citizens, communities, and groups to take up the challenge, to understand that they can uphold the rights of nature and their own even against government policies and corporations. It has happened. It is happening.