Opinion: The surprising new design of the most ambitious ocean cleanup in history

We’ve all heard some version of “ask better questions, get better answers.” It’s the type of philosophy that is held dearly by the great minds and the great leaders of our world.

Given that the World Economic Forum has reported that plastic is projected to outweigh fish in the ocean by 2050, projects like The Ocean Cleanup are desperately needed.

In a previous post, we described the inspiration and research behind the project, the basic design of the cleanup systems, and the launching of the first prototype in the North Sea.

Nine months and 21.7 million dollars in funding later, the mission remains the same but the basic design has changed.

While grappling with the problem of the complexity of mooring the cleanup system to the seabed in the middle of the Pacific, The Ocean Cleanup team had an epiphany.

Instead of having one large system anchored to the ocean floor, they now plan to deploy a fleet of smaller drifting systems that float where the plastic floats.

The science behind how this will work is fascinating and well worth listening to Boyan Slat explain it here (demonstration begins at 13:45).

In short, the systems will float with the same currents carrying the plastic, but they’ll float slower than the plastic because of the dragging anchor, which will allow them to catch the plastic.

Here are some big benefits of the new design:

What’s Next for The Ocean Cleanup? 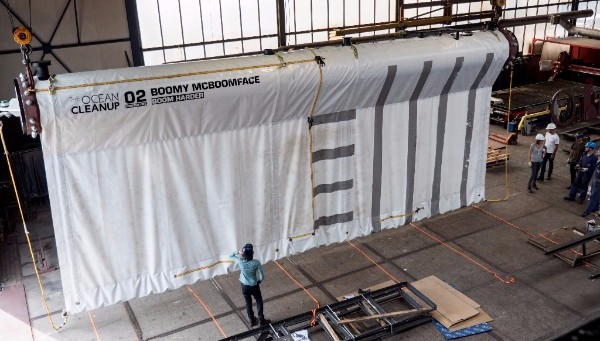 The new prototype has been deployed and is currently being tested in the North Sea. The first cleanup system is now scheduled to hit the Pacific in the middle of 2018, two years sooner than expected.

The Ocean Cleanup has come a long way since its inception four short years ago, but the hard yards are still ahead.

If you believe in ridding our oceans of plastic, there are two ways you can support this project:

Awareness is the first step in solving our grand challenges, and it’s never been easier to do our part in sharing.

Cameron Brown is the co-creator of Cleantech Rising.