If there was a world cup for clean energy, who would win it?

Please note the calculations which are courtesy of data analysts Global Data is based on the clean energy percentage of the total energy generation and is therefore different from the total clean energy installed. As some of the rankings might surprise you it is important to clarify that we have included nuclear and hydro in the figures.

1 – Sweden (98.8 %). The national team of Sweden have never been full of skilful players but they generally exceed expectations in tournaments due to their organisation and hard work ethic. And they now face a quarter-final against England. And while the majority of renewable energy accolades have gone to their neighbors Denmark and further south Germany, they have quietly gone on to win our World Cup on clean energy generation. Nuclear and hydro aggressively dominates their electricity production, but both solar and wind power are growing fast in the country who are also conducting R&D projects on wave power. Further, the country wants to be able to run entirely on renewable energy by 2040 and earlier this year they enacted a new climate act which they called the most ambitious in the world.

2 – Costa Rica (98.3 %). The nation was before the tournament dubbed as one of the dark horses, though they did not proceed to the final 16. But in our World Cup, they are claiming an impressive silver medal owning to their large generation of solar and wind. In the country, there has been a clear focus on investing in renewable energy capacity, and it is evident it is starting to bear fruit.

3 – Switzerland (96.1 %). It is not only on the football pitch that the alpine country is turning in some pretty impressive performances. However, as a consolation for losing out to Sweden in the second round, they can take some pride in the fact they’re claiming bronze in our world cup. They excel in clean energy generation, with a staggering 96.1% coming from clean energy sources. Hydro is king in Switzerland with nuclear a close second. Solar and wind are minimal so far, but in a referendum last year on an energy transition the Swiss voters accepted to cut emissions and encourage investment in solar and wind alongside hydro.

Data by Global Data, graphics by A greener life, a greener world.

4 – France (92.1 %). France is one of the favourites for this year’s tournament, winning their group and turning out a world-class performance in the second round. Also in the clean energy space are they turning out a top form with a total of 92.1% of energy generation coming from clean energy sources. A large part of that is owing to the fact they still rely on nuclear for a big portion of their electricity generation while aggressive extending their solar and wind portfolios. When the game gets tough they keep their cool and unlike Germany (who haven’t even make it into top ten on our list) they resisted the temptation of rapid nuclear decommission following the Fukushima nuclear accident.

5 – Brazil (81.8 %). The South American superpower, also one of the heavyweights in the World Cup and tipped to go all the way. On clean energy they score remarkably high which might come to some people’s surprise. And it does come with some controversies as one of the reasons they’re so high on the list is due to two factors: mega-dams and biofuels. They’re both controversial as the hydropower mega-dams are displacing local people and indigenous populations by flooding certain areas whilst also having an adverse impact on biodiversity. Biofuels are also hugely controversial as it takes away land that could be used for growing food, and in the case of Brazil also contributes to deforestation.

6 – Denmark (75.7 %). The small Scandinavian country still lives high on their 1992 European Championship victory which surprised the whole world (including themselves). However, the football fanatic Danes will be dissapointed that their next football adventure will not be this time around, narrowly losing out on a quarterfinal by losing to Croatia on penalties. They can, however, pat themselves on the back that another adventure, the wind energy adventure which started in the 1970’s on the back of the oil crisis is today bearing fruit. The small country is considered a world leader in wind power with the two largest wind turbine manufacturer Vestas and Siemens having their headquarters there.

7 – Croatia (73.4 %). In footballing terms, you never want to write off Croatia and this time around they have qualified for the quarter-final. While hydropower satisfies the largest share of clean energy in Croatia followed by nuclear, in recent years wind power is becoming a much bigger player. The country has done so well on renewable energy that it has already met its 20% target by 2020 and is considering increasing it. 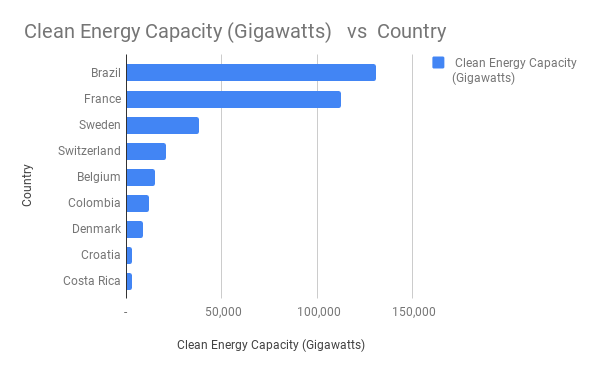 Data by Global Data, infographic by A greener life, a greener world.

8 – Belgium (71.0 %). Many believe the time has come in this World Cup for Belgium’s golden generation. And with a series of dazzling displays, those predictions are only intensifying. On clean energy, the small but populous country also remains a big player with the largest chunk coming from nuclear. But wind and solar power capacity have also steadily been increasing year on year.

9 – Columbia (66.3 %). The South American country has shown some flair in this World Cup but will be disappointed they narrowly lost out on quarterfinal by losing to England on penalties. But like their neighbor Brazil they have a large abundance of clean energy resources garnered mainly through hydropower. However, historically they have offered little support for other forms of low-carbon energy. But in 2014 a new renewable energy and energy efficiency law was enacted. Though questions remain about how well the law will be implemented.

10 – Panama (63.3 %). It was the small Central American country’s first ever World Cup. A country you would not think about at first when talking about football or clean energy. But on both issues, the country has made steady progress of late. While they did not manage to collect a single point at the World Cup, they just managed to make their way into our list, owing largely to a large reliance on hydropower. But due to prolonged periods of drought, particularly one in 2014, the country shifted its focus to developing more non-hydro renewables such as wind and solar and in 2011 they held their first wind power auction.