South American country torn between coal and renewables as it prepares for December climate talks. 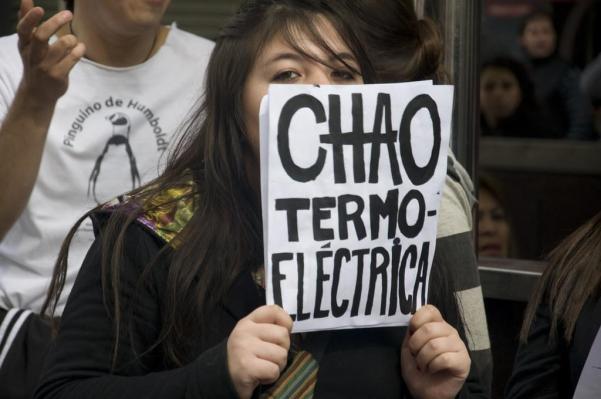 An anti-coal protestor in Chile, host of the UN’s COP25 climate talks, which take place in December. Photo credit: carobrown.

More than 20,000 people will arrive in Santiago, Chile, in December for UN climate talks (COP25) as calls to heed warnings about the effects of climate change and accelerate global action become increasingly urgent.

Yet, the city that will welcome diplomats, activists and journalists are largely powered by coal, one of the most polluting energy sources. Coal accounts for 40% of Chile’s energy matrix despite the recent expansion of solar and wind farms.

“Coal is the country’s main problem,” said Matías Asun, director of Greenpeace Chile, adding; “It would be unacceptable to organise the COP without first having a plan to close all plants that use that technology.”

With talks six months away, President Sebastián Piñera is working on a ‘decarbonisation’ plan, to be announced on June 4.

As part of the Paris Agreement, the 2015 climate commitment signed by 194 countries, Chile promised to reduce greenhouse gas emissions by 30% by 2030 compared 2007 levels. To achieve this, it would have to abandon coal power, since it accounts for 91% of the country’s carbon dioxide (CO2) emissions, according to NGO Chile Sustentable.

Chile has 28 coal-fired power plants, mostly operated by US (AES-Gener), French (ENGIE) and Italian (ENEL) companies. They use coal from mines in the country and imports, mainly from Colombia.

Most plants came online in the last decade owing to shortages of natural gas imports from Argentina. They are spread across eight provinces but the majority are concentrated in just five: Tocopilla, Mejillones, Huasco, Puchuncavi and Coronel.

“Chile produces coal and does not sell it. It’s all for domestic consumption. It has historically been a cheap fuel for the generation of energy,” said Cristián Muñoz, founder of the Breves de Energía website. “However, reducing the costs of renewable energy will change the equation.”

Residents in coal-burning provinces, which they call “sacrifice zones“, have suffered nausea and headaches because of the concentration of pollutants, according to NGO Chile Sustentable. These provinces are now undergoing decontamination.

“In addition to being energy that contributes negatively to climate change, it is causing many health and environmental problems,” said Gabriela Burdiles, project director at environmental NGO FIMA. “There are increasing demands to close or reconvert the plants, especially the oldest.”

Chile’s coastal coal plants also use large quantities of seawater to cool turbines and at the same time suck up large amounts of phytoplankton, a vital part of the marine ecosystem, which they further destabilise by pumping out hot water and chemicals. Artisanal fishers are also impacted.

Coal combustion also produces large volumes of ash waste, which contains chemicals such as silica, aluminium, iron, calcium and heavy metal oxides. In Chile, this waste is not considered hazardous.

Chronicle of a death for coal

Both the Chilean government and energy companies recognise the need to close coal-fired power plants and formed a working group on decarbonisation last year, which yielded a timetable for their closure.

Although it has not yet been announced, the schedule will see the phase-out of 1,000MW of coal from the matrix over 10 years through the closure of eight of the country’s oldest plants. Civil society groups expect all plants to cease operations before 2030.

“Decarbonisation will happen, the question is when,” according to Sarah Larraín, director of Chile Sustentable, who said there was political consensus on the matter. “It is the chronicle of a death foretold…Now we need a quick schedule to leave it behind.”

Piñera announced at a COP25 launch event that Chile will build no new coal-fired power. In 2030, 70% of electricity in will be generated by renewables, he said.

In the short term, the government’s plan involves more imports of natural gas from Argentina, which has increased production and lowered costs with new resources from the Vaca Muerta formation in Patagonia.

Today, Chile imports 10 million cubic metres of Argentine gas, but that can be extended “many more times”, according to Piñera. Gas provided 24% of Chile’s electricity supply in March, compared to 20% in the same month of the previous year, according to consultancy S&P.

Natural gas emits between 50% and 60% less carbon dioxide (CO2) than coal but is far from being considered clean energy. Extraction and transport also generate methane emissions and combustion emits sulfur and mercury.

“Chile used to depend on Argentine gas and when the supply ended, coal-fired plants appeared. Now they want to import gas again and that does not make sense,” said Gary González, an economist at the Terram Foundation. “We complain about the impact of coal here but there are also people suffering from gas.”

While its use of coal has been questioned, Chile’s expansion of renewable energy, especially solar and wind, which currently represent about 20% of the energy matrix, has been praised.

During Michelle Bachelet’s first presidential term (2006-2010), the country passed a law to increase the share of renewables in the energy mix to 10% by 2024. However, this goal was later extended to 20% due to the speedy global roll-out of clean energies, driven by China.

In 2017, during her second term, Bachelet implemented a carbon tax of US$5 per tonne of CO2 emitted to discourage new coal-fired plants.

“We have 20% renewables but we could have much more,” Asun said. “All our energy matrix can be based on clean energy by 2040 if we do it progressively. We could use solar energy during the day and dams at night as a battery.”

With 55 plants expected to come online this year, powering 9.4% of the energy matrix, solar is set to become the third-largest source of electricity generation. Wind power will contribute 6.3%, with 14 new plants.

One of the latest wind projects to open was the US$140 million Punta Sierra farm, the first such Chinese investment in Chile, made by Pacific Hydro and State Power Investment Corporation. It has 32 turbines and an installed capacity of 82MW.

The wind farm, located in the province of Ovalle, 400 kilometres north of Santiago, will reduce annual CO2 emissions by 10,000 tonnes, equivalent to taking 40,000 cars off the road. According to government estimates, Chile has 37,000MW of wind power potential.

According to Muñoz, all new power plants will be renewable energies, but they can’t meet the country’s energy needs on their own: “Renewable energy needs support, so we must discuss what other source that support will be.”