U.S and Ireland partner up in tidal power development venture 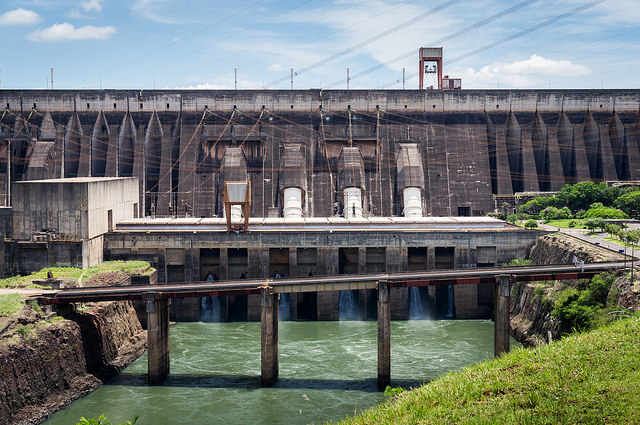 The Itaipu Hydroelectric Power Plant by Deni Williams on Flickr.

An opportunity to propel Ireland into a leader of tidal and marine renewable energy projects has been established recently with U.S. based Verdant Power, Inc. and Irish company Belleville Duggan Renewables Ltd, joining together to create the company, Verdant Isles.
“Duggan Renewables is excited to announce the establishment of Verdant Isles as a partnership with Verdant Power – a world leader in the design and application of marine and hydrokinetic (MHK) energy solutions” stated John Butler, General Manager of Duggan Renewables.
Within the next six years, Verdant Isles plans to have a 40 megawatt (MW) tidal energy system commissioned. However, the venture does not stop there. Further research into Ireland’s accessible energy resources will be an integral part of this joint venture, which is no surprise as a Sustainable Energy Authority Ireland (SEAI) study demonstrated that tidal energies current potential in Ireland could be in the region of 900-gigawatt hours (GWh) per year.
Not only is tidal energy an economic driver and source of clean energy, but it is also a job creator. Verdant Isles plans to set up a manufacturing base in the region to become part of a global supply chain for marine energy devices, creating around 250 Irish jobs.
Development of even half of the predicted 900 GWh potential that Irish waters have is in the region of more than €150 million in investment.  As tidal energy is set to become the largest growth area in the clean technology sector over the next decade, Ireland is planning to be at the forefront of the development.  It’s no surprise that Verdant Power, Inc. and Belleville Duggan Renewables Ltd partnered up on this project.
Verdant Power has been in the U.S. tidal market since its establishment in 2000, and was the first company to receive a Federal Energy Regulatory Commission license for the marine power project; the 1.05 MW Roosevelt Island Tidal Energy Project in New York City. This project was the world’s first and only company with a grid-connected array of tidal turbines that generate power for New York.
Verdant Power also received a grant from the National Science Foundation to advance the research, innovation, and training within MHK technology in partnership with the University of Minnesota, in 2013. As well as this, it was one of six companies that received funding from the U.S. Department of Energy’s office for Energy Efficiency and Renewables Energy in December for the advancement of MKH survivability and reliability.
“The establishment of Verdant Isles allows Verdant Power to develop opportunities in Ireland and the UK by partnering with a locally-based EPC renewable energy contractor and developer with whom the company has established a strong working relationship,” said Trey Taylor, co-founder of Verdant Power.
Belleville Duggan Renewables, on the other hand, was established by Duggan Brothers (Contractors) Ltd., which was founded in 1926. The aim of the company is to further research available technologies of renewable energies, which has mostly concentrated on Hydro and Biogas industry.
“Our goal is to become one of the leading project developers in the clean-tech sector,” said John Gleeson of Bellville Duggan Renewables. “To achieve this, we need to be aligned with technology developers at the forefront of their respective areas.”
Related news:
It’s one step for tidal energy, one giant leap for renewables
A tidal energy revolution is on the horizon in the UK