A display screen that is powered entirely by indoor lighting 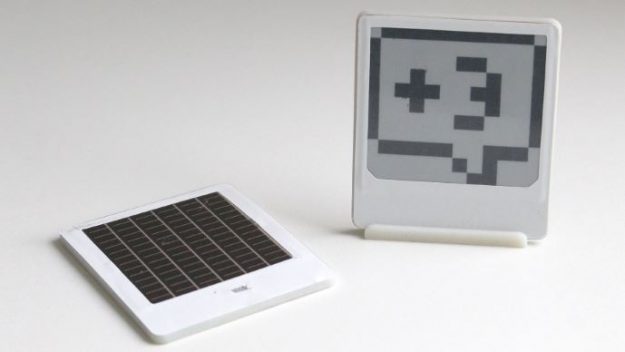 In the age of gadgets and devices, which all need charging, could you imagine one that will never need to be charged and which in effect charges itself?

That is nevertheless what engineers at Microsoft have accomplished.  They have designed a display screen which, via a layer of solar PV cells, can be powered entirely by indoor lighting, even in low-lit conditions.

The gadget is a digital version of a Post-it note. It can display information such as the weather, the date, or just reminders.  It will receive its information to display every 1 to 25 minutes via Bluetooth Low-Energy from another digital device such as a tablet or laptop. Once received, the information will be displayed within seconds.

The device uses relatively few large pixels to save power, and it is fitted with a thin flexible panel on the back, which is attached to a thin-film battery.  Its low-resolution e-paper is 35 times more energy-efficient than small high-resolution displays. Due to such low energy requirements, it can work indefinitely even in indoor environments with low lighting levels.

The technology, which is being developed by Microsoft Research at the University of Washington, Seattle, is currently in its prototype stage. But maybe this is a long awaited breakthrough in creating grid-free gadgets, gadgets that with the advance in solar technology can power themselves. While this is still some way off from being a reality, in smartphones or laptops for instance, perhaps the Microsoft achievement could signal that a much greater breakthrough in this technology is imminent.