China’s role in global climate change is a contentious one. For years it’s been seen as carbon enemy number one, the careless coal consumer condemning us all to climate catastrophe. It was mostly China that scuppered the Copenhagen talks in 2009, and it is generally accepted that it will be impossible to stop runaway climate change without their cooperation. The central reason is obvious from this graph of China’s coal consumption: 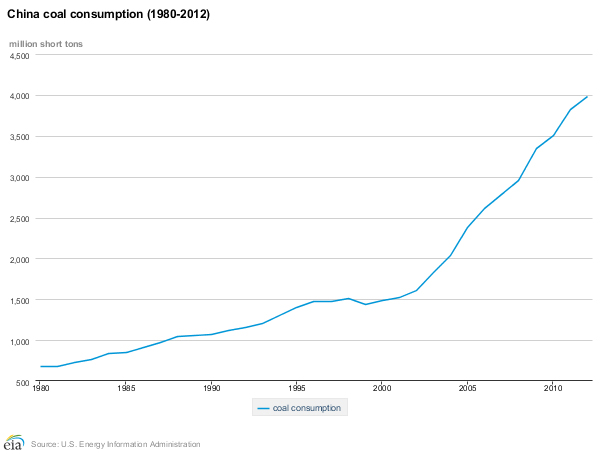 That boom in coal consumption has made China the world’s biggest emitter of greenhouse gases, overtaking the US. Since the whole thing happened after climate change was well understood and many other countries were trying, however begrudgingly, to reduce their emissions, it really has been spectacularly unhelpful. So let’s not beat about the bush: China has deserved the criticism for its energy policy.

However, there have been a string of more positive stories recently. First of all, that graph doesn’t show the peaking of coal consumption that appears to have happened just in the last couple of years – it could reflect a slowing economy, or it could be the beginning of a decline. Then there’s been the rapprochement in the climate talks, and joint meetings between China and the US appear to have resolved their main differences. There’s a growing concern over air pollution at home, giving the government another big incentive to limit coal consumption. But how much of this is greenwash? Is China just playing along for better PR?

These questions have led to something of a tug of war between climate optimists and pessimists. China leads the world in wind power investment! But China is building more new coal power stations than anyone else! Look at the huge strides in solar capacity! Look at the support for new coal mines in Africa!

There’s a lot at stake in this argument. For those who think that, it’s still possible to stop climate change, it’s important to establish that China is changing. Others suggest that China’s ongoing coal use makes any of our own carbonisation efforts pointless – a convenient view for sceptics, of course. Not only do we get to skip all the hard work of cutting emissions, we get to blame any future disaster on China.

So let’s look beyond the ‘biggest’ and look at proportions. According to the IEA, China invested $90 billion in renewable energy in 2015, and $45 billion in fossil fuel electricity generation. There’s far too much coal in that, but China is still investing 2 to 1 on renewable energy over fossil fuels. The direction of travel is towards clean energy.

That transition is likely to accelerate, as the IEA reckons that China already has enough coal power. Existing coal power plants are idle for half the time on average, and new ones are likely to be underused. This is part of a wider over-investment problem in China, where the economy has relied too much on infrastructure to drive growth. In other words, China’s coal investments may not reflect future emissions. They may turn out to be pointless, and indeed, there have been government efforts to rein in coal power and mining. A huge amount of money may have been wasted, and some might argue that it would have been better spent on renewable energy instead. It’s not quite that simple, though, as China is installing renewable energy as fast as it can be integrated into the grid.

Here we see more evidence that China is serious about an energy transition. In order to expand renewable energy significantly and manage energy use well, many countries are investing in a smart grid. The UK opened it’s first digital substation in 2016. China beat us to it by an entire decade, installing its first in 2006. Britain aims to install smart meters in every home by 2020, though at 2.3 million installations so far some suspect we are behind schedule on that. China has already fitted 317 million smart meters, covering 100% of urban households and 70% of rural homes by the end of 2016.

That’s electricity generation. China also spent $15 billion on solar thermal heating, and the country is miles ahead here. 70% of the world’s solar hot water capacity is in China, six times more capacity than the whole of Europe put together. Many Chinese households have leapfrogged straight past gas boilers and their first experience of hot water on tap is solar.

Then you’ve got China’s ambitious plans for a national EV charging network, serving what is now the world’s largest market for hybrid and electric cars – including many car brands unknown to us. Then there are developments in waste-to-energy plants, dozens of new nuclear power stations, and a national circular economy plan. China is one of the only countries in the world to be actively encouraging citizens to eat less meat. For ten years in a row, China has installed more hydropower than the rest of the world combined. Thanks to government subsidies, 100 million people use domestic biogas digesters to supply their main cooking fuel. This year will see the launch of a cap-and-trade scheme that has been many years in the planning.

These are not the actions of a country that is faking its interest in climate change. There’s no denying its massive contribution to climate change, but there is more to China than coal.

It stands to reason that China would take action eventually because it has a lot to lose. If current projections for 4 degrees of warming, China’s coastal cities would be devastated. Shanghai, a financial centre and the world’s busiest container port, would practically cease to exist. The country already struggles with floods in cities, and natural disasters would increase. To the North, the Gobi desert will expand, and China’s air pollution is already compounded by the dust blowing in from the region.

China has all of this to avoid, and much to gain. More advanced economies potentially have more inertia and more vested interests in fossil fuels. China can be more flexible and can plan long term in ways that democratic countries can’t. With its nuanced view of free trade, China has been able to support all kinds of technologies from solar PV to battery storage to solar cooling. I would argue that China has spotted the opportunities inherent in climate change better than anyone, and has slowly positioned itself to take full advantage. As a report pointed out just last week, five of the six largest solar firms in the world are Chinese. I’ve mentioned the $90 billion China spent on renewable energy at home, but Chinese firms also invested $32 billion in clean energy projects elsewhere around the world. Just as the US owned the oil age, China is going to own the age of renewable energy, selling leapfrogging technologies to the developing world and transition technologies to the West.

In conclusion, China has a complicated role in the unfolding story of global climate change. Its coal boom has been horrendous, but it should not be seen as the final word on the subject. In time, I suspect we will come to see China as the world’s first renewable energy superpower. Things are moving fast. There is more going on than we generally hear about. And what happens in the coming years will affect all of us.