Our top ten of 2016’s most refreshing climate communicators 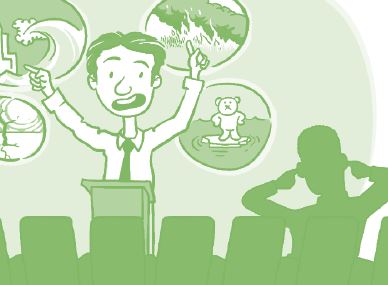 We believe that Alex Steffen has emerged as one of the world’s top climate communicators. We give him the number one spot here, as in our opinion no one communicates the climate message more refreshingly and positively than he does. Several powerful posts on climate change have appeared on his Medium page and have been widely shared and, arguably, the most popular being ‘Trump, Putin and the Pipelines to Nowhere‘. We believe no-one is more deserving of the number one spot than Alex Steffen.

This Canadian but Texas-based climate scientist is one of the most important voices in engaging with people to accept the reality of climate change. Instead of pushing people and communities away who might not entirely share her opinion she believes that closer engagement with groups who do not, at least at first, share her view is crucial. She rose to fame in the climate change documentary TV series ‘Years of Living Dangerously’, where we follow her as a devoted Christian giving lectures in churches in communities hostile to climate action. She does what many scientists have failed to communicate, yes, you can be religious and also believe in science and accept that climate change is real. Those two things do not necessarily need to contradict each other. Apart from being a fantastic scientist, she is also a brilliant communicator.

You can’t talk politics and climate change without mentioning Bernie Sanders. In his campaign to be the Democratic nominee for president, he surprised everyone by being a much stronger alternative candidate to Hillary Clinton than many had expected. It is undeniable he made her discuss climate change much more than if her opponent had not Bernie Sanders. Climate change being one of his core issues, he forced Clinton to discuss it, even though many of the debate moderators were not particularly keen to bring it up.

The Mayor of Paris, Anne Hidalgo, has proved a hit with the world, the French and social media. She frequently tweets to her 1 million Twitter followers. And more often than not she talks about the case for sustainability actions, green and sustainable cities (she is the current Chair of C40), and combating air pollution. The latter has been one of her signature policies, and the French capital has been leading some of the most progressive and bold air pollution policies in Europe. This they do by banning cars with even or uneven number plates from driving in the city on the most polluted days, and by promoting cycling as a real alternative to car driving.

Again in 2016, the Hollywood heartthrob was the number one celebrity to raise the issue of climate action. He took the message to Canadian Prime Minister Justin Trudeau and stressed the importance of tackling climate change in a powerful speech upon receiving an Academy Award. And of course, he starred in and co-produced the climate change documentary Before the Flood in which he interviewed Barack Obama and other key players in the climate change fight. And let’s not forget he frequently raised the subject of climate change in his new UN role as Messenger of Peace.

Also in 2016, the now former US president set the rest of the world alight when it came to highlighting the issues of climate change. In our opinion, no world leader comes close to Obama when it comes to highlighting the risk of a warming planet, and he is making sure world leaders take notice. His leadership has forced discussion at key international summits. At home, he continued to strengthen environmental policies, and even in the ‘Lame Duck’ period. he did not slow down. On social media, he continued to communicate about the climate on a weekly basis. Let us also not forget that it was the US together with China which became the first industrialised nations to ratify the Paris Agreement. Under Obama’s leadership, the US has shifted from not being a believer to being a leader in tackling climate change.

Ida Auken is a Danish MP, a former government Environment Minister, Young Global Leader and a member of the World Economic Forum’s Council for Future of Cities and Urbanisation. She was born into a political family.  Her mother, Margrethe Auken, is a European Union MP for the Socialist People’s Party (SF) and her late uncle, Svend Auken was the former leader of Denmark’s largest party: the Social Democrats. Ida Auken is one of those progressive young Danish politicians who has a particular skill in communicating to and engaging young people. She is very active on Twitter where she tweets in both Danish and English. She talks about a number of issues ranging from waste, circular economy, clean energy, the case for smarter cities, minimalism, technology and cities of the future. In 2016 she also wrote this powerful and popular WEF article.

Meteorologist and writer, Eric Holthaus rose further to prominence in 2016 with his continuing presence on Twitter, as well as a series of powerful climate change articles on Slate, which were shared widely. He also became the host of the new podcast series, Warm Regards, which explores climate change news, events, solutions and ideas with a range of different guests.

Environmentalist, Senator and Deputy Leader of the Australian Greens, Larissa Waters, was in 2016 a very vocal voice in the climate debate down under. She challenged the lacklustre Australian government for prioritising coal over renewables, while they ignored the climate change impact of the most polluting fossil fuels and its role in the destruction of the Great Barrier Reef.

Eriel Tchekwie Deranger is an Indigenous rights advocate and a member of the Athabasca Chipewyan First Nation (ACFN) of Northern Alberta, Canada. Also In 2016, she was a vocal voice in support of indigenous communities, especially during the resistance to the North Dakota Access Pipeline and the many human rights violations against anyone who opposed it. Eriel Tchekwie Deranger, and many indigenous groups and environmentalists who opposed the project received world media attention. They were undoubtedly a major influence on Obama decision to deny permission for the controversial pipeline to cross indigenous lands.
This list is just a selection of the many talented, important and interesting climate communicators of 2016. We are, of course, always happy to hear suggestions and feedback.