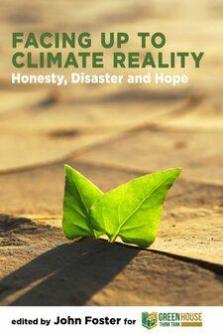 Most climate change campaigns and commentators are putting a brave face on climate change, says the introduction of this new collection. “But the stark, categorical truth is that things now are certainly going to get worse – much worse – whatever we do. Hardly anyone wants to admit this.”

In response, the Greenhouse thinktank has commissioned a series of responses to the starting assumption that “dangerous climate change is now inevitable and that we are going to have to live in a postgrowth world”, and released it in this book, Facing up to Climate Reality: Honesty, Disaster and Hope.

The book deals with politics, and how the breakdown of the climate could affect international relations. It looks at disaster preparedness and extreme weather. Other chapters warn about geoengineering and ask that perennial question of whether or not capitalism can or should survive. It ends by looking at the psychology of dangerous climate change, and asking where hope might still be found.

Not light bedtime reading then, but a serious attempt to grapple with difficult questions that we’re not really paying attention to. Among those questions is a take on the one that kickstarted my blogging 12 years ago, when I realised that development as currently defined was impossible to universalise. Four degrees of warming, the book warns, “will remove the option of a secure and materially abundant Western lifestyle not only from those who have long been incited to inspire to it but (even more perilously) from those who currently enjoy it.”

For the authors, this means there is no choice but to consider postgrowth alternatives. If we don’t, “postgrowth economies might emerge by default rather than design”, which is a whole lot worse than carefully planning it out in a sustainable transition.

I found Jonathan Essex’s chapter on urbanisation particularly useful, given the focus on cities at the moment. If current trends continue, the world’s built infrastructure will double between now and 2050, which in itself blows the carbon budget. Unless the city can be radically re-imagined, a centuries-long trend towards bigger cities will somehow have to be reversed.

More specific to one city, Anne Chapman contributes a chapter on how Lancaster dealt with Storm Desmond in 2015. She describes how floods affected emergency services, the electricity grid, council operations, and even university timetables. It’s full of insights into why we should think through disasters ahead of time and develop contingency plans to protect the most vulnerable.

Facing up to Climate Reality feels like it is raising issues that may take fifty years or more to really understand. It’s courageous in the questions it asks and radical in its implications. It will be most useful to climate communicators and postgrowth thinkers and probably doesn’t need to be high on the reading list for most of us. For a shorter and more accessible shot of climate realism for a layman’s audience, I’d recommend XR’s recent This Is Not Drill.

First published on The Earthbound Report.