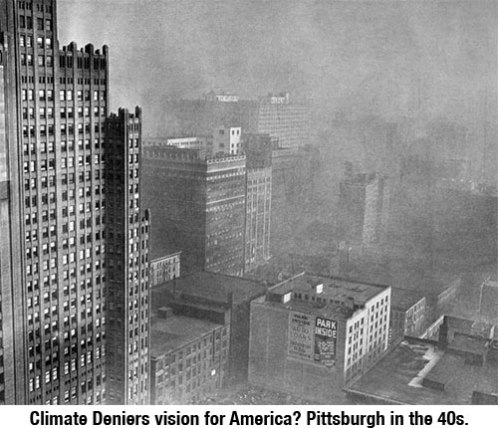 In announcing a withdrawal from the Paris Climate agreement, President Trump used the phrase “Pittsburgh, not Paris”, proving that he understands Pittsburgh as little as he understands the  Paris Agreement.

In virtually every respect, Climate deniers vision for America is at odds with the real world that actually exists.

‘The mayor needed a break, and now he had a cold beer and a shot of whiskey on the table in front of him. His Penguins cap was pulled low. His dress shirt was untucked. Bill Peduto was tired after days of firing off defiant tweets, issuing city proclamations and running to speak at rallies and give interviews to media from around the world — generally fighting back with everything he had after President Trump justified pulling the United States out of the Paris climate-change pact by saying at the White House late last week, “I was elected to represent the citizens of Pittsburgh, not Paris.”

“He was saying, ‘Oh poor Pittsburgh, look at the trouble they’re in,’ ” Peduto said now, sipping his beer. “But that’s not Pittsburgh.”

Peduto, 52, a Democrat, sat inside a small bar called Cappy’s, his eyes locked on a large-screen TV. He, along with just about everyone else in this southwestern Pennsylvanian city, was watching the Pittsburgh Penguins play in the Stanley Cup hockey finals Saturday. He was surrounded by friends. Some had grown up here, like he did, and remembered what the city had once been like when the steel mills were closing. Others had arrived more recently, as Pittsburgh reinvented itself into a hot spot of technology and medicine, where Uber tests its driverless cars, Google employs hundreds of workers and its hospitals are among the best at organ transplants.

Many people in Pittsburgh, from retirees to steelworkers to students, said they viewed the Paris deal — which calls for countries to meet voluntary goals for reducing emissions — as an opportunity for the city, especially in a place that once was so smoggy that streetlights sometimes were needed during the day in the 1940s. The move to greener technology would mean retrofitting buildings to make them more efficient, providing the raw materials for wind turbines and helping develop driverless taxis, to which the city gave a green light last year.

That’s what got Peduto so mad. Having experienced the rise and fall of the steel industry, Pittsburgh already knew that trying to hold on to its past was futile.

“Time only goes one way,” Peduto said, walking down the street outside the bar during an intermission in the hockey game.’

‘HARRISBURG, Pa. – Some Pennsylvania business owners say President Trump’s decision to withdraw from the Paris agreement to combat global climate change will damage, not help, the U.S. economy. Trump said the Paris accord would drain billions from the U.S. economy and cost American jobs.

But according to James Spencer, president and chief executive of Everpower, a Pittsburgh-based onshore wind-energy development company, renewable energy, not fossil fuels such as coal, is where current and future economic growth and jobs will be found.

In contrast to Trump administration energy plans, China will be investing $360 billion in renewable energy by 2020, creating an estimated 13 million jobs.

Kjerstin Klein, the owner of Willi’s Ski Shop in Pittsburgh, says the effects of climate change already are being felt. For most of her business’ 40 years, they could rely on certain weather benchmarks to predict what they needed to order for the coming season.

“That has literally just absolutely been thrown out the window the last couple of years,” she says. “We can’t rely on any of the numbers, any of the figures, any of the forecasting tools we used to use.”’

‘Two years ago, Kansas repealed a law requiring that 20 percent of the state’s electric power come from renewable sources by 2020, seemingly a step backward on energy in a deeply conservative state.

Yet by the time the law was scrapped, it had become largely irrelevant. Kansas blew past that 20 percent target in 2014, and last year it generated more than 30 percent of its power from wind. The state may be the first in the country to hit 50 percent wind generation in a year or two unless Iowa gets there first.

Some of the fastest progress on clean energy is occurring in states led by Republican governors and legislators and states carried by Donald J. Trump in the presidential election.

The five states that get the largest percentage of their power from wind turbines — Iowa, Kansas, South Dakota, Oklahoma and North Dakota — all voted for Mr. Trump. So did Texas, which produces the most wind power in absolute terms. In fact, 69 percent of the wind power produced in the country comes from states that Mr. Trump carried in November.

Renewable energy that produces no carbon dioxide emissions is not solely a coastal, blue-state phenomenon. From Georgia to the Dakotas, business and political leaders are embracing clean energy sources even as the Trump administration pushes for more exploitation of oil, gas, and coal.

These red states are not motivated by a sudden desire to reduce greenhouse gas emissions. Nor are they joining solidly Democratic New York, Washington, and California in defending the Paris climate agreement that President Trump walked away from last week. Instead, their leaders see tapping the wind, and to a lesser degree the sun, as an economic strategy.

In modern America, advocacy of states’ rights is often seen as a conservative stance, an aspect of the right’s general hostility to a large national government. But Michael Kazin, a historian at Georgetown University, pointed out that causes like giving women the right to vote and, more recently, gay marriage had often succeeded at the state level first.

“In the American system, the states have enormous powers, which sometimes are used for progressive causes,” Dr. Kazin said.

More than a decade ago, frustrated by federal inaction, climate change activists and clean energy enthusiasts joined forces to push state governments to adopt binding targets for renewable energy. Climate change was a less divisive issue then, and a majority of the states — including many of the windy Great Plains states — did so, often setting targets to be met by 2020 or 2025.

Analysts have found that most states are on track to meet their targets, usually well ahead of schedule. In recent years, the conservative advocacy organizations founded by the industrialists Charles G. and David H. Koch have tried to get the targets repealed, but they have largely failed.’

First published on Climate Denial Crock of the Week.