Imagine that you have blown your entire year’s budget in the first seven months of the year. Now imagine that you’ve actually been doing worse every year, breaking the bank earlier and earlier as the years pass. You wouldn’t really be considered fiscally responsible, would you?

Yet, collectively, that’s exactly what we’re doing. For the next 150 or so days we will be living beyond Earth’s resources. The Global Footprint Network estimates that at our current rate of resource use, we would need 1.7 planet Earths, based on average global consumption. If we all lived the way the average American does, that number shoots up to 4 Earths.

What are the types of resources we’re talking about? Food, water, energy and other natural resources like trees. And is there a point of no return? The Stockholm Resilience Center, a European research institute dedicated to offering science-based policy guidance on resilience-building, lists 9 planetary boundaries which, it says, “could generate abrupt or irreversible environmental changes” if crossed. Of these 9, the Centre says 4 — climate change, biodiversity loss, land-use change, and the flow of phosphorus and nitrogen into waterways — have already been breached. “Transgressing a boundary increases the risk that human activities could inadvertently drive the Earth System into a much less hospitable state, damaging efforts to reduce poverty and leading to a deterioration of human well-being in many parts of the world, including wealthy countries,” said Professor Will Steffen of the Centre in a press release.

It’s a truism that more human beings will consume more stuff, but at what point will the planet have more humans than it can ecologically handle? New estimates of population growth see our ranks swelling to 11.2 billion by 2100, an uptick from previous estimates which saw population leveling off around 9 billion.

Population growth scenarios based on fertility levels over time.

Of the roughly 7 billion people on the planet today, nearly 12%already don’t get enough to eat. While part of this has to do with poor allocation of resources (which I’ll cover in a separate post) a rapidly growing population will tax locally-available resources. Since most of this growth is projected to take place in developing countries, this means more people competing for resources in already resource-strapped localities.

Population growth is not our only worry. A related, and perhaps more concerning issue is consumption intensity, or per capita, consumption per unit of GDP — basically the concept that people in developed countries use far more resources than people in developing countries. One stunning statistic quickly puts this in relief: a child born in the United States will use on average as many resources as 35 children born in India. The Sierra Club’s Dave Tilford told Scientific American that, “With less than 5 percent of world population, the U.S. uses one-third of the world’s paper, a quarter of the world’s oil, 23 percent of the coal, 27 percent of the aluminum, and 19 percent of the copper.”

As people enter the middle class, they tend to consume more and more expensive products and services. The flip-phone gets upgraded to a smart phone; new appliances like a dishwasher and washer and dryer get installed; the bicycle or moped gets traded in for a gas-guzzling car; meat consumption increases; and so on. This is cause for concern because the middle class is growing in both developed and developing countries around the globe, and it’s growing at a faster pace than economists had predicted. 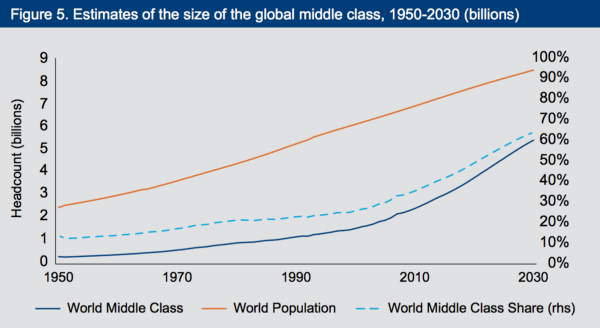 There were about 3.2 billion people in the middle class at the end of 2016, 500 million more than the Brookings Institution had previously estimated. Over the next 15 years or so, global middle-class consumption could increase by as much as $29 trillion.

While most countries are moving forward with their Paris Accord climate pledges (with the glaring exception of the United States), keeping global temperature rise below the 2 degree Celsius (3.6 degrees Fahrenheit) mark, long deemed critical by climatologists, now seems unlikely.

This may leave many citizens and consumers feeling powerless and frustrated, but as individuals, there’s still a lot we can each do to make a difference. Here are a few suggestions:

These are just a few tips to get you started, I’ll be sharing more in blog posts to follow, and I’d love to hear your tips (and suggestions for future posts) in the comments section below. Until then, happy consumption tracking!

Kaveri Marathe is a sustainability writer and entrepreneur based in Washington, DC. She is the Founder and CEO of Texiles, a startup dedicated to eliminating post-consumer clothing waste. Find out more at www.texiles.com.