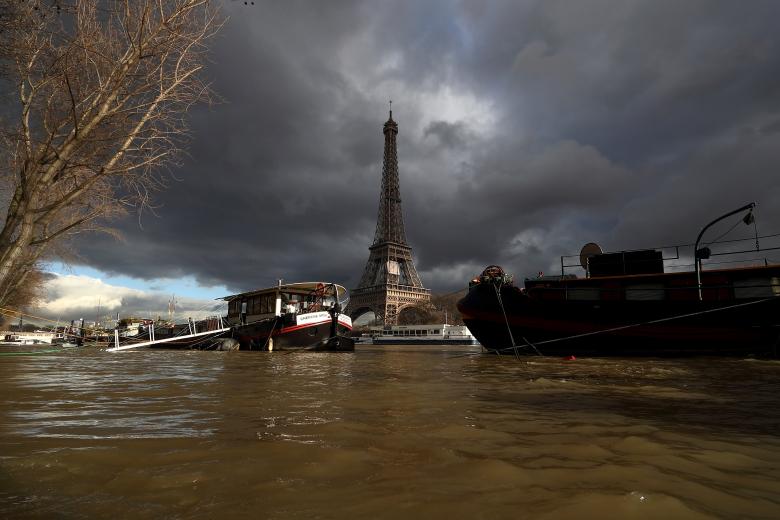 Last year France elected centrist, Emmanuel Macron, as their next President. One of his key election promises was to tackle climate change. And the leftist Paris Mayor, Anne Hidalgo, is a strong climate advocate and the current president of C40 Cities – the network of cities committed to tackling climate change.

There are good reasons for Macron’s and Hidalgo’s strong climate focus, as in recent years extreme flooding has become a recurring problem in Paris and France as a whole.

Is Paris prepared for climate change?

Last week, Paris and many regions were hit by extreme flooding – resulting in the river Seine bursting its banks following one of the wettest January’s in a century. This comes just 18 months after the river reached its highest levels since 1952 in Paris and nearby cities.

During the floods, 13 out of France’s 96 administrative departments had flood alerts. The weather monitoring body, Meteo France, has said that this is the wettest winter in France since 1959.

There will be questions asked whether France is really prepared for climate-induced extreme weather events. Unlike London’s Thames River, the Seine does not have a barrier to protect the city when the river level rises. This is why the situation we witnessed in Paris last week does not occur in London, even though London also gets its fair share of extreme rainfall.

As a result of the River Seine bursting its banks, several monuments and museums had to be closed and valuable artwork evacuated. This means, of course, that Paris’s important cultural scene, which brings in large amounts of tourist income each year, could be threatened by climate change unless drastic steps are taken.

Florence Habets, a senior researcher at France’s National Center for Scientific Research (CNRS), told the New York Times, that climate action was necessary to limit the risks of such weather events: “Because of climate change, we can expect floods in the Seine basin to be at least as frequent as they are right now. No matter what we say, the more we reduce our greenhouse gas emissions, the more we reduce our impact on droughts and floods.”

And in a tweet, Anne Hildalgo said: “Beyond the emergency, this cruel phenomenon, more and more recurring to Paris, reminds us of the importance of adapting our city in the face of climate change.”

Back in the 1910s, the level of the Seine was recorded to have reached more than 28 feet in some instances. Had the same level being recorded today, with the current infrastructure in place, it is estimated that about five million people would be seriously affected, and the cost would be €30 billion.

And a theme we have seen in other places is also evident here. The frequency of these weather events means, that areas barely recovering from the previous flooding are struck again. This time heavy rains also flooded parts of eastern and northwestern France which were seriously impacted by the 2016 floods, making re-rebuilding much harder and more expensive.

Homeowners, businesses and not least the Paris art and culture scene will be worried about the economic impact of these extreme weather events, which occur more and more often, and they might be wondering if more needs to be done to combat the increasing threat of climate change.