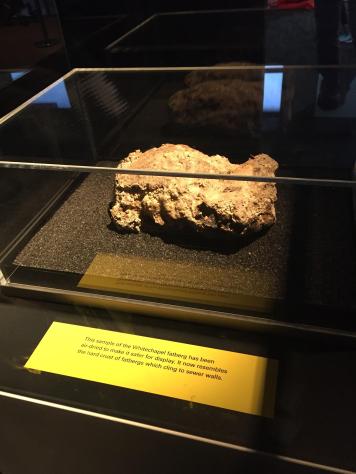 One of the two pieces of the Whitechapel fatberg on display as part of the FATBERG! exhibit at the Museum of London. Photo credit: Kirstie Wielandt.

Visitor numbers are up at the Museum of London, as locals and tourists flock to see two unsightly chunks of the infamous ‘Whitechapel fatberg’, removed from the Victorian sewers of East London last year. The exhibit is supported by a wonderful array of merchandise, including sludge-coloured ‘fatberg’ fudge packets and ‘don’t feed the fatberg’ hazard signs.

Upon entering the exhibit, which has been curated to be as menacing and atmospheric as possible with biohazard tape and creepy lighting, the chunks themselves are modest in size and appearance. At first glance they look like nothing more than two lumps of grey’ish concrete matter, appearances are deceptive, however, and the two items are so biohazardous that they are encased in three layers of fibreglass to protect the viewer from their noxious gases and other lurking dangers. There are even stories of flies hatching in the fatberg and flying around the boxes until they presumably ran out of oxygen and died. This is the stuff of urban legend, and Londoners, it seems, can’t get enough of it.

The original fatberg was 250m long (one of the largest ever!) and consisted of 130 tons of congealed cooking fat, sewage, wet wipes, sanitary products, plastic wrappers and a host of other materials took several months to remove it from its original home. Professional ‘flushers’ employed by Thames Water, who are responsible for maintaining London’s water supply and infrastructure, wore hazard suits and used pick axes and high powered water hoses to dislodge the ‘berg’ and remove it to an undisclosed location where most of it was converted into approximately 10,000 litres of biodiesel for London’s buses. As Thames Water waste network manager Alex Saunders explained “It may be a monster, but the Whitechapel fatberg deserves a second chance… (and) we’ve teamed up with (a) leading waste to power firm … to transform what was once an evil, gut-wrenching, rancid blob into pure green fuel.’ 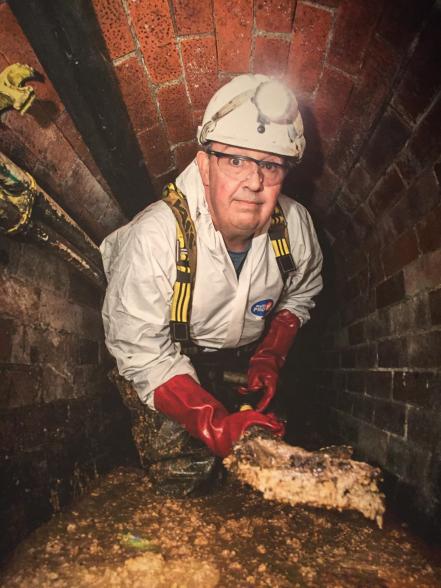 One of the Thames Water ‘flushers’ tasked with clearing the original Whitechapel fatberg with shovels and pickaxes. Photo credit: Museum of London.

Fatbergs have become a regular feature of city sewers, and a symbol of ‘wasteful’ urban living, being the direct result of households and businesses flushing unsuitable waste materials down their sinks and toilet cisterns. Out of sight, out of mind, it seems, until ancient infrastructure literally clogs up beneath us and utility companies must spend thousands of man-hours and pounds flushing out our systems. London’s fatbergs are infamous, not in the least due to our ageing Victorian infrastructure, however, fatbergs exist all over the world in urban environments, most recently also in Australia, France and Mexico.

Can fatbergs be avoided? Not it seems without a holistic collaborative approach which would include including forced separating of waste, only disposing of biodegradable items, collecting cooking fat in special bins, etc. Whilst the world decides whether this is realistic, the Museum of London’s efforts are a welcome act of public service whilst also being suitably hilarious and grotesque in equal measure.

Meanwhile, the London ‘flushers’ can continue to enjoy a busy, and hopefully lucrative, career stalking the city’s old sewers for creatures of the dark (matter).

FATBERG! launched at the Museum of London on 9th Feb 2018 as part of its free City Now City Future season

THAMES WATER says it is working towards self-generating 33% of the electricity it uses from renewable sources by 2020.

ARGENT ENERGY was the company Thames Water recruited to transform as much as possible of the Whitechapel fatberg into biodiesel.