The world’s oceans are heating up at an alarming rate 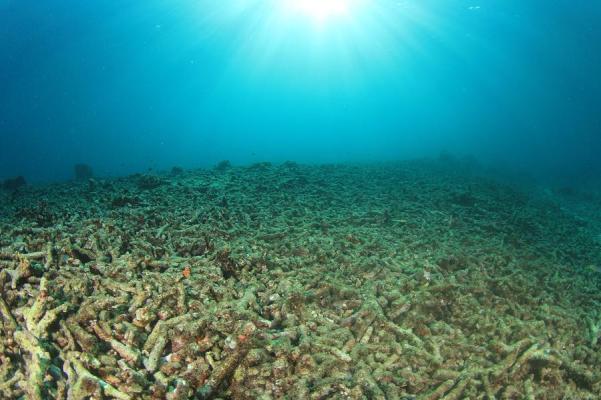 Dead coral in the ocean caused by rising temperatures due to climate change. Photo credit: Rich Carey via Bigstock.

The world’s oceans are warming faster than previously expected a group of scientists has warned.

Prior to this warning, there was already worried about the state of the world’s oceans due to the fact that the majority of the CO2 emitted is absorbed by the oceans.

In 2018 the world’s oceans set a new temperature record and it is a trend that is damaging marine life, scientists have warned.

Researchers in the US and China have published the new data in the journal Science. They documented that new measurements, aided by an international network of 3,900 floats deployed in the oceans since 2000, showed more warming since 1971 than calculated by the latest UN assessment of climate change in 2013. Based on that they said that the ocean of hot content is not only increasing but also accelerating.

The warming in the oceans is having profound impacts on the marine ecosystem and forces fish species to migrate to colder waters which could bring the whole system out of balance.

The data details that overall, temperatures in the ocean down at the depth of 2,000 meters rose about 0.1 degree Celsius (0.18F) from 1971-2010. In 2013 UN assessment estimated slower rates of heat uptake. Ocean temperatures are less influenced by year-to-year variations in the weather. It can take more than 1,000 years for deep ocean temperatures to adjust to changes at the surface.

Kevin Trenberth of the U.S. National Center for Atmospheric Research and a co-author of the study said, “The deep ocean reflects the climate of the deep and uncertain past”.

Some of the impacts of the oceans heating up includes a reduction of oxygen in the oceans damaging coral reefs that are nurseries for fish, the scientists said. Warmer seas release more moisture that can stoke more powerful storms. Additionally, warmer ocean water also raises sea levels by melting ice, including around the edges of Antarctica and Greenland.

The world’s governments, bar the US, have through the Paris Agreement committed to keeping warming at no more than 2 degrees C. But they are facing a race against the clock to achieve that and the mainstream scientific view is now that it might no longer be enough to avoid dangerous climate warming increases the risk of tipping points. In the Intergovernmental Panel on Climate Change’s (IPCC) latest report, they advocated that adopting a 1.5 degree C target will be a much safer option.