Opinion: Climate change is a silent driver in India’s election

India’s political leadership is failing to explicitly make the connection between security, development and climate change in this election campaign, even though many issues hinge on it.

All state governments in India are fighting over water, even as reservoir levels go down to the point where many hydropower stations are working at a fraction of their capacity. Photo credit: Kannan Muthuraman.

To borrow a phrase, a spectre is haunting Indian politics, and it is a spectre that politicians are afraid of naming. India is a complex, diverse country with a population of around 1.3 billion. It simultaneously hosts some of the world’s richest people as well as the largest number of people living below the poverty line. It can launch probes to Mars, deploy an anti-satellite system, and yet struggles to eradicate polio and tuberculosis.

Making generalisations about such a country is an exercise in guesswork which inevitably misses important points. Any extrapolation that ignores even 1% of the population leaves out the equivalent of the whole population of countries like Rwanda, Belgium or Greece.

It is, therefore, surprising that almost all the issues that are dominating the headlines during India’s elections are inextricably linked to one issue. From extremism to employment to economic growth, Indian politicians are almost all talking about the impact of, response to, and dangers of climate change, though the phrase is mentioned only occasionally in manifestos and almost never in campaign speeches.

The Hindu nationalist Bharatiya Janata Party (BJP), of the ruling National Democratic Alliance coalition, has made much of the issue of terrorism and extremism. Its manifesto highlights this, with the first section, titled “Nation First” focussing on three regions that account for the vast majority of casualties in India: Jammu & Kashmir, the northeast, and the areas where left-wing extremism (the Indian term for an armed insurgency that has risen and subsided across regions known as the “Red Corridor” since the 1970s) is prevalent. While none of these militant movements is caused by climate change, all of them will be impacted by it.

Jammu and Kashmir is in the Hindu Kush Himalayas, which is already seeing serious uncertainties in water availability due to climate change – sometimes too much water, sometimes too little. The northeast – traditionally a very high rainfall region – is facing an unprecedented drought. Central India – the hotbed of left-wing extremism – is drying out because the monsoon rainfall keeps getting more uncertain due to climate change, and most farmers there are dependent on rainfed agriculture. The overall effect is one of worsened distress for the majority of people who are dependent on agriculture.

One of the striking aspects of the Kashmir militancy has been its linkup with Pakistan, and to Pakistani backed insurgents in Afghanistan. Masood Azhar, the leader of the Jaish-e-Mohammed group that took responsibility for the attack in Kashmir in February 2019 that killed more than 40 security personnel, was released to the Taliban in 1999 by India after militants hijacked an Indian Airlines flight and flew it to Kabul. Last year Afghanistan suffered more casualties due to drought than militancy, although the war casualties have not gone down. As in Syria, the militancy in Afghanistan has been linked to drought by some commentators, though there is no empirical study that explores the relationship. 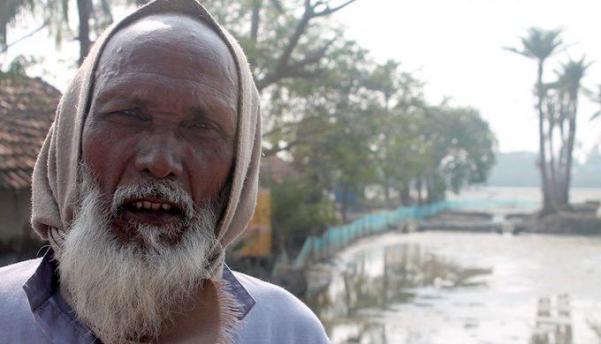 In a village on the edge of the Sundarbans and facing the Bay of Bengal, Jasimuddin Sarkar in front of his farm that now grows nothing, thanks to sea level rise, and his house that gets flooded with dirty saline water every third or fourth day. Photo credit: Joydeep Gupta.

Ajmal Qasab, the one attacker captured alive after simultaneous attacks on railway stations, hotels and other civilian venues in India in November 2008, apparently came from a poor family in Faridkot, Pakistan, and money was an important incentive for his taking part in the attack. While India can do little to control the situation in either Afghanistan or Pakistan, the conditions which provide easy recruits for radical causes, which may be used against India, are inextricably tied to climate change, which has put an immense strain on rain-fed agriculture in the region.

In the northeast, the BJP’s focus has been on illegal immigration, allegedly from Bangladesh, and a Supreme Court-monitored process in the state has identified up to 4,000,000 people as being unable to satisfactorily prove their citizenship. The BJP has pledged to expand this process across the country. What this overlooks is that South Asia’s coastal regions are seeing a clear danger from rising seas as the polar ice melts and oceans warm. Those living in such regions are often already poorer than their fellow citizens, and the displacement will force them to migrate, often playing havoc on any documentation they may have. This process is already hitting both India and Bangladesh particularly hard.

The Observer Research Foundation, a think tank, estimated that in the Indian part of the Sundarbans alone, 1.5 million out of 4.5 million people living there will have no choice but to move out, because farming and fishing – their two sources of livelihood – are already becoming untenable due to the impacts of climate change. Managing this increase in displaced persons will only become increasingly difficult in the future, setting in place resentments that will provide more opportunities to extremist groups.

The same holds true for the left-wing extremism that has long afflicted India. These groups have found their cause in indigenous populations or pauperised labour communities who have either been exploited by local business networks, or displaced by mining companies. With both droughts and floods becoming more frequent due to climate change, these communities face greater economic challenges in the future. Without some preparation for livelihoods in the future, the appeal of radical groups will only grow in the future.

The main opposition party, the Indian National Congress, has a more detailed manifesto than the incumbent party. Its lynchpin argument is the revival of jobs and the creation of a minimum basic income scheme for the poorest among Indians. Both the first and second sections of its manifesto are based on these issues, with the second section starting with a focus on the agricultural sector. And yet, climate change finds no mention in these categories despite the fact that much of India’s agriculture is rain-fed, and it employs – either directly or indirectly – nearly half of its population.

Climate change has disrupted reliable, timely access to water, and that has destroyed the ability of marginal farmers to plan their economic growth (the BJP promises piped water to every home, but that will not take care of agricultural needs). This has a terrible knock-on effect on other jobs. A farmer facing drought will migrate to an urban area and sell his (women form a very small part of this) labour to make ends meet, but that farmer is likely to be exploited because he is selling his labour in a buyer’s market.

Huge amounts of electricity are created in Kinnaur, but most villages have to deal with extended power cuts. Photo credit: Subrat Kumar Sahu.

Similarly, the impact of climate change in the Himalayan regions within India has led to crop patterns changing, destroying stability in income, and driving large-scale migration out of these vulnerable areas. Women, who often make up much of the (underpaid) workforce in agricultural areas, also have their financial and social stability disrupted.

Lastly, there is the issue of economic growth. Both the BJP and the INC have promised to drive up India’s economic fortunes. The INC has a more detailed, but nevertheless relatively conservative strategy when it comes to the economy. Climate change has pushed the Indian economy into a crisis. A report by the World Bank already estimates that climate change will cost India 2.8% of its GDP every year by 2050.

A new future, not a beggared past

India needs a New Green Deal, something that can help revive its agricultural sector, lower the usage of water (almost 80% of which is used in agriculture) and create economic opportunities in its future. Without a future of promise, the economy is basically playing the greatest hits of the past, with a large share of the population who are already shut out of the economy being marginalised further, or at best, provided a dole. There is little realisation that new hits are needed in a climate-changed world.

The worst part of the old record of greatest hits is the continued reliance on fossil fuels. Oil and gas imports form a large part of India’s external payments and are a major factor in maintaining its macroeconomic stability. The skyrocketing of oil prices during the term of the last government (2009-14) had a massive impact on India’s economy. And while oil prices have remained comparatively low during the last five years, the tightening of economic sanctions against Iran by the US, the chaos in Venezuela, and continuing instability in Iraq and Libya leave India’s economy vulnerable to sudden shifts in pricing.

The continued reliance on coal-based power is also dangerous. Approximately 13% of India’s non-performing assets (bad loans) crisis of US 25 billion (and growing) is investments in coal-based plants. While India has made commendable steps in expanding its renewable energy sector, this is largely in hydropower plants, many of them based in the vulnerable Himalayan regions where extreme weather events are likely to make them risky. They also replicate many of the problems of big energy, which benefits concentrations of power and money far away and renders jobless those close to their location.

India’s freedom movement was part of a wider global movement of decolonisation, and building up of representative governance. Post-Independence leaders could, and did, speak to their constituents about the broader world in which India’s actions played a vital part, and by which India was affected, whether these spanned the Suez crisis, the Korean War, or the Vietnam War.

The current challenge of dealing with climate change is more fundamental. At a national scale, it is affecting India’s marginalised communities perhaps more than anybody else in the world. At a global scale, the way India responds to climate change – especially the way it does or does not move away from coal, oil and gas in its energy production and transport sectors – will play a large role in determining how bad the impacts around the world will be. India requires a global vision with local application. As of yet, though, Indian political leaders have not made that connection.