US 2020 election: Tom Steyer – the billionaire with a climate agenda who wants to take on Trump 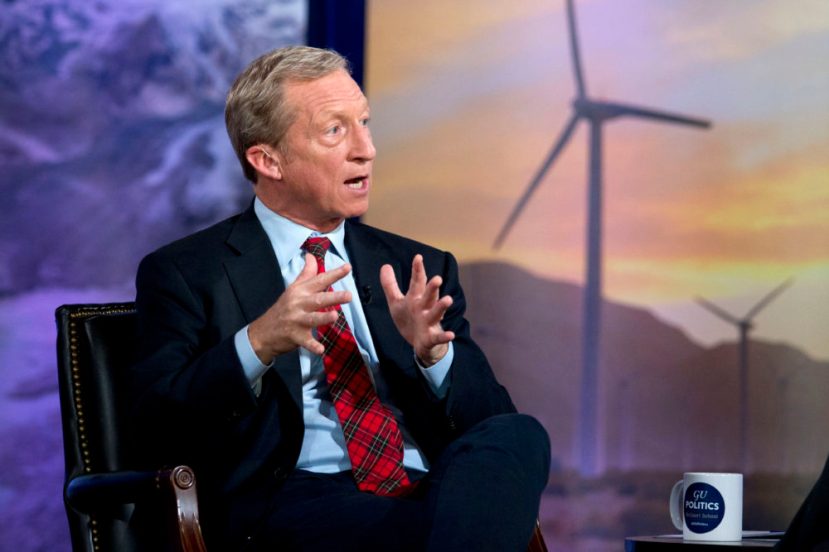 Many in the US environmental movement will be familiar with Tom Steyer. The Californian billionaire and former investor have been spending his fortune backing politicians with strong climate agendas.  He has also thrown his weight behind defeating anti-climate and environmental bills and proposals, and climate-denying politicians.

Now he himself wants to be a politician and is running for the highest office in the US, the Presidency, and is among the seven candidates still standing as the Democratic nominees.

He is facing stiff competition though and it is a distinct possibility that by the time you read this he will have withdrawn from the race. Though in the most recent of the primaries, the Nevada Caucus, due to the diversity of the population of the state, he did better than many had been anticipating though languishing in fifth place just ahead of Amy Klobuchar.  He delivered a defiant message saying he was in it for the long haul and that his campaign was picking up steam. The latest polling for the South Carolina primary which will take place this Saturday he is currently in third place only behind Bernie Sanders and Joe Biden.

Proud of everything we accomplished in Nevada. We're only gaining strength as the electorate gets more diverse and more representative of the country. pic.twitter.com/NlJ8Nm171U

He is one of the candidates responsible for making climate change one of the main issues this election cycle and has won many fans. Whether this is enough is yet to be seen, but pollsters and media commentators do not give him much chance.

Steyer, the 62-year-old father of four, defines himself as an environmentalist and activist. As of February 2020, it is believed that his net worth is $1.6 billion. Much of this he earned as a hedge fund manager and director of Farallon Capital, an investment firm which he has now retired from. He now uses his fortune to back climate and other noteworthy philanthropic causes and engages in political and climate activism.

What has Steyer done?

In 2013 the billionaire founded NextGen America, an environmentally focused political-action committee which spent $96 million during the 2016 election campaign to support climate-friendly candidates, most of whom were Democrats. Steyer said he has spent years fighting and beating oil companies, pipelines, stopping fossil fuel power plants and ensuring clean energy. As a key opponent of the controversial Keystone XL pipeline project, he successfully lobbied President Barack Obama to shut down the project. Obama eventually did so, but Trump has restarted the project.

What is Steyer pledging to do?

Were he to become the next US president he would on his first day in office declare a national climate emergency.   He would re-enter the US into the Paris Agreement, although the US has not actually exited yet, and the next US president could anyway stop that process going through. He also said he would undo and freeze Trump’s rulemaking on climate and environmental laws and regulation and would set up new clean energy plans. He would also call for stronger international cooperation to combat climate change.

Steyer says he would build a community-based network to inform his policies and a “Civilian Climate Corps” that would be funded with $250 billion in bonds over a decade and create one million jobs. He also indicated that he would eliminate fossil fuel subsidies saying he would get rid of “all forms of government giveaways” to fossil fuel companies. On infrastructure, he would commit $2 trillion over a decade to make infrastructure more climate-friendly and resilient. He believes that would mobilize an additional $4 trillion non-government sources.  Half of the total would be focused on cleaner energy, industry and buildings, and would include modernizing the power grid and reducing methane emissions. About $775 billion would go into cleaning up transportation, including expanding electric vehicle charging infrastructure.

He emphasises that stopping climate change would be his number one policy.

Steyer has come under criticism from one particular rival candidate’s Joe Biden, who served as Obama’s Vice President, for having invested in fossil fuels during his time as an investor. It is believed he profited from investing in coal, oil and gas. He has himself admitted he was previously investing in all parts of the economy, but he has divested his money from fossil fuels and now gives a large proportion of his wealth to charity and philanthropic causes.