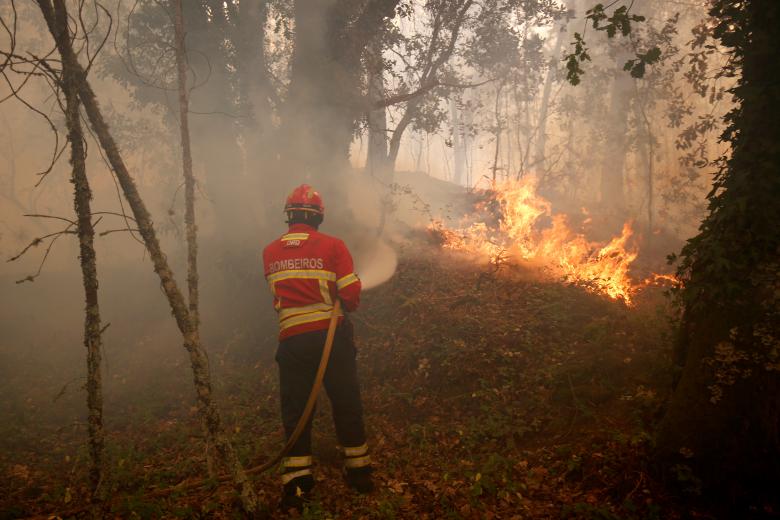 A firefighter tries to extinguish a fire during a forest fire near the village of Torgal. Photo Credit: Reuters / Rafael Marchante.

That scenario could justifiably be linked to the recent unprecedented forest fire in Portugal which has claimed over 60 lives. Portugal’s Prime Minister, Antonio Costa, has called it the biggest human tragedy in the country in living memory.

It is believed the fire broke out after a lightning strike on a tree. It occurred in the area of Pedrogao Grande. This is a mountainous area about 200 kilometres (125 miles) northeast of Lisbon which is prone to forest fires. The intense heatwave and the dry gusty winds fanned the flames and thus created a forest fire of epic proportions.

To give an idea of the scale of the fire, which we in Europe are only used to hearing about in connection with places like Australia and North America, on the third day since it started 1,000 firefighters were still trying to bring it under control. French and Spanish forces came to assist deploying water planes alongside Portuguese forces. Rui Barreto, who is a deputy chief firefighter at the makeshift emergency services headquarters in Pedrogao Grande, said: “there is still a lot of forest that can burn and the rain does not make much difference”.

Smoke rises from a forest fire, seen from the village of Mourisco in central Portugal. Photo credit: Reuters / Axel Bugge.

Thomas Curt, a researcher at the National Research Institute of Science and Technology for Environment and Agriculture, has said that climate change has extended the forest fire season in the region from two to up to five months: “it is a certainty, we are witnessing a rise in temperatures, and warmer air is synonymous with drier, more flammable vegetation…. These meteorological conditions increase the risk of fire and also their intensity. We can now see fires, like that of Portugal, which firefighters can hardly extinguish.”

In Europe, the increase and intensity of warm spells including heat waves, as well as an increase in the annual mean temperature, are all in line with what climate scientists have been predicting.

And while Portugal is more prone to forest fires than its Southern European neighbours, the whole of the region can expect to have their forest fire season extended by the same period of around five months. The rise in the frequency and severity of heatwaves in Europe is set to increase and could be one of the key battlegrounds as the continent combats climate change.