Analysis: As the UK government enters an agreement with climate denying DUP, is their climate change leadership diminishing? 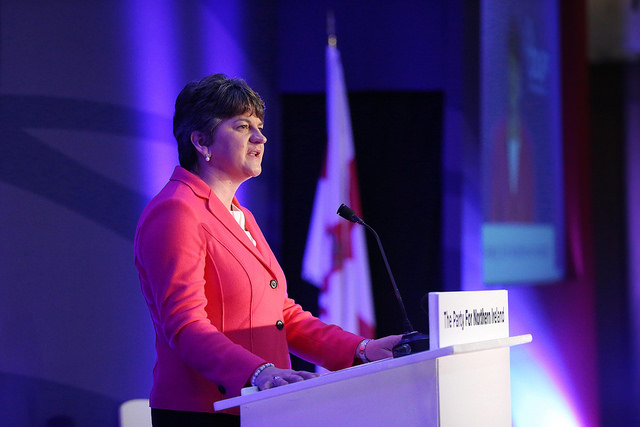 The Democratic Unionist Party (DUP) might be unfamiliar to many around the world, and quite likely even to many in the UK. But the Northern Irish Unionist party could be about to enter onto the world stage, as they have agreed to support the battered new UK government. On Thursday, under the leadership of Prime Minister Theresa May, the Conservative government suffered an embarrassing setback as they lost their House of Commons majority, in the snap election she had called in the hope she would increase her majority.

Many of you are aware of the DUP, through their presence in the House of Commons. But many are likely to be unsure of what they stand for. Not anymore. Since they will now play a key role in the formation of the new UK government, interest is increasing. Founded in 1971, the DUP are, apart from being anti-LGBT and against the right to abortion, also climate change deniers. And there are also concerns that any agreement between the DUP and the Conservatives could seriously impact peace and political stability in Northern Ireland, brought about by the Good Friday Agreement in April 1998

Their anti-climate change views derive from their anti-science stand as many of their senior members hold creationists views. There is nothing in their manifesto and policies officially opposing action on climate change because there is no mention at all of the issue, demonstrating that they clearly do not see it as a problem. There’s an argument that the best form of climate denialism is in fact to ignore it.

One could indeed look at their lack of climate change policies for some kind of proof of their anti- climate views. Northern Island is the only part of the UK not to have any legally binding targets to cut emissions. And in December the then Northern Irish environment minister blocked attempts to introduce a Northern Ireland Climate Change Act. The bill had been backed by the other opposition parties in the Northern Irish Assembly, Sinn Fein, the SDLP and the Alliance Party.

In 2008 they appointed climate denier, Sammy Wilson, as Environment Minister. In that role, he did his best to distort the issue of climate change. He banned TV and radio adverts by the UK government that encouraged people to cut their carbon emissions, calling them propaganda. In 2010, he hosted a celebration of “Climate Fools Day” in Parliament, where he brought together climate sceptics to lambast climate change science. It was organised with Piers Corbyn ( the brother of the UK Labour Party leader, Jeremy Corbyn), with whom he has also attended other climate-sceptic events. Due to pressure from cross party MP’s, the government sacked him shortly afterwards.

Globally the UK enjoys broad praise for its climate leadership, which up until now has been pushed by successive governments. It was under David Cameron’s government that the world signed the Paris Agreement, in which the UK is understood to have played a significant role.

But since then the situation has deteriorated, starting after Mrs. May took over from Mr. Cameron in the wake of the EU referendum result. She has consistently failed to back the UK’s commitment to climate action and failed to confirm that we would at least keep EU targets on emissions reductions and renewable energy, thereby causing an uncertain market for clean energy investors. When Donald Trump announced that the US would leave the Paris Agreement she failed to join fellow EU world leaders in condemning the decision – she only managed to mutter that she was disappointed with the decision.

And now as she’s entering an agreement with a climate-denying party in order to cling onto power, a large proportion of the UK public is worried about what she will give away in order to enter that agreement, and what signal that will send to the rest of the world.