Analysis: The EU steams ahead with a bold new green vision 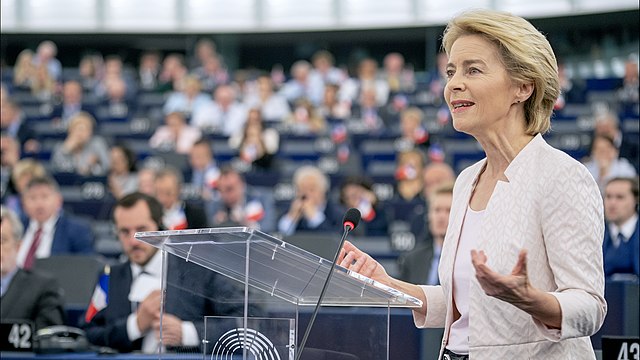 The European Commission (EC) has decided on their next president, Ursula von der Leyen who will take over from Jean-Claude Juncker president since 2014.

Von der Leyen will leave her position as Germany’s Minister of Defence to take up the most prestigious title in the EU, but she had been opposed by the ever-growing group of Greens in the European Parliament. They opposed her because they were not convinced that she would do enough to tackle climate change. But perhaps her pledge to give that issue priority will make them think again.

Tuesday last week she laid out her proposals and, perhaps due to pressure from the Greens but also maybe influenced by the shift in Europe to pass tougher and more ambitious climate policies, von der Leyen will aim for the EU to achieve net-zero emissions by 2050.

Phillip Lamberts from the European Greens explaining their opposition to von der Leyen: ‘‘our common house is burning, the climate is deteriorating, there are ever deeper inequalities and a backlash in fundamental freedoms and the rule of law.” He did, however, say that they would be willing to work with her. Due to their opposition towards her, the confirmation in the parliament was a narrow victory of just nine votes.

She has laid out bold emission targets wanting to reduce the 2030 emission target of 40% from 1990 levels to around 50-55%. And perhaps mirrored by a popular proposal of the same name in the US, she will within her first 100 days in office submit a ‘Green Deal for Europe’ as well as a ‘European Climate Law’. She also announced plans for sustainable European investment (through the partial conversion of EIB funds into a “climate bank”) to provide €1 trillion in investments within a decade.

And in a crucial pledge which could prove controversial, she would be open to introducing an import levy on countries that continue to pollute, although she gave no indication of which countries might qualify or the maximum level of pollution the EU would be willing to tolerate. France and its allies have been pushing for a carbon border tax for more than a decade, but the idea has never won the unanimous backing from national governments that would be needed for it to become law.

Von der Leyen also said that everyone must contribute to fighting climate change. This will include the aviation and maritime industries, “emissions must have a price that changes our behaviour,” she said. In the first instance, the maritime industry would be included in the EU’s emissions trading scheme the ETS and airlines would have various free allowances removed. Because of the removal of free allowances in recent years, the price of a tonne of carbon has this year reached an all-time high getting closer to the levels experts have said is needed to tackle climate change. Earlier this year an influential investor predicted that the price would continue to rise and as a result, we would see a collapse of Europe’s coal industry.

Von der Leyen is a former doctor, the mother of seven children, and the first woman ever to lead the European Commission. Under her leadership, more than ever before, the stage looks set for a commission more ambitious about tackling climate change.