On the road to a ‘green recovery’? Greenpeace trolls the UK government 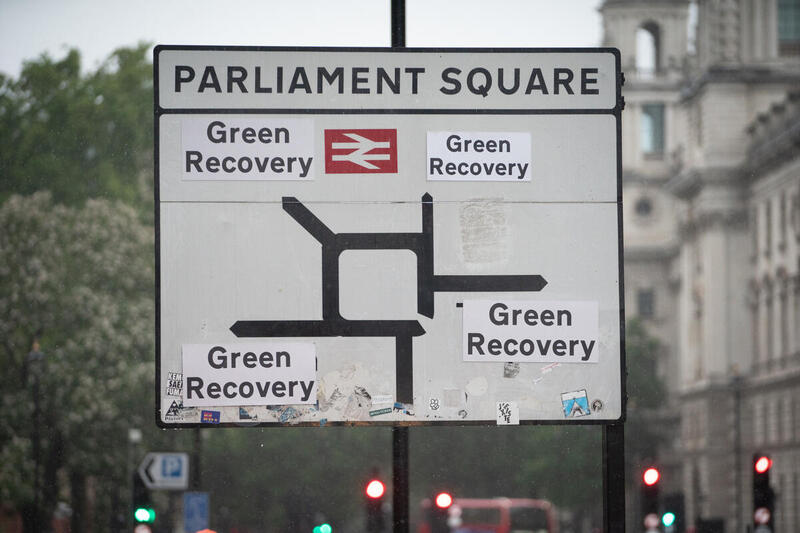 This Wednesday, environmental protest group Greenpeace UK signalled their exit from lockdown by staging an action as a warning to the UK government to put the environment first in any stimulus package.

The group staged a direct action in Westminster, the political headquarter of London and the UK, by replacing destination names on road signs near the Parliament building with ‘green recovery’ labels.

Only a green recovery will do

The stunt happened ahead of an economic statement by UK Chancellor Rishi Sunak later the same day. Greenpeace UK said that the objective was to send out a clear message to the government, that much greater investment is needed for green transport, energy, housing and waste sectors and in generating green jobs in any economic recovery package.

The activity is in line with the growing pressure upon governments around the world to pursue recovery packages that support green industries and not polluting ones.

Pointing the UK Chancellor in the right direction

There have been growing concerns that the government is setting more money aside for road building alone (£27 billion) than towards a green recovery. The UK Chancellor did announce a £3 billion stimulus package to improve the energy efficiency of homes and buildings but so far that’s the full extent of green recovery measures, much to the disquiet of campaign groups. 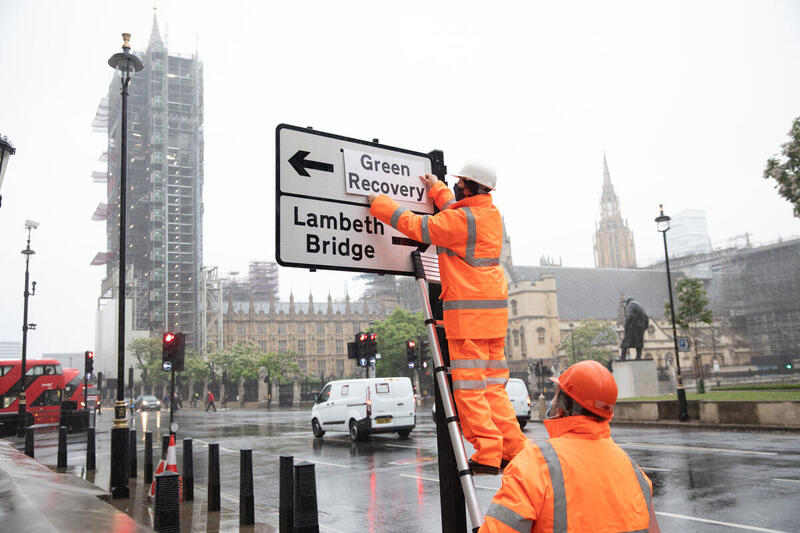 “Just in case the Chancellor was worried about getting lost on his way to deliver his economic statement today, we’ve made it abundantly clear that there’s only one route he can take. All roads must now lead to a green recovery”. She explained there is no alternative option and that Sunak’s going to have to dig quite a bit deeper if he genuinely plans to ‘build back greener’ and earmarked what is required: “An initial £15 billion cash injection in green ‘shovel ready’ projects would create hundreds of thousands of new jobs, almost immediately, right across the country, while making transport greener, homes warmer, energy bills lower and restoring nature”.

Greenpeace UK said further support for the private and social rented sector is still required to level up the country and tackle fuel poverty. They added that the commitment on energy efficiency does not go far enough and is far off the £9.2 billion pledged to improve energy efficiency laid out in the Conservative Party manifesto last year.

They highlighted that the Chancellor’s £3 billion green stimulus package is also much smaller than the £36 billion invested in carbon-cutting measures by Germany and the £13.5 billion commitment from France. Greenpeace added that total spending on the green recovery should add up to at least £25 billion additional investment per year over the next four years.

The government under pressure to deliver

A report published by Greenpeace earlier this month identified that 1.8 million new jobs would be created over four years if this green recovery plan was put into action by the government.

Greenpeace and other green groups, experts, business leaders, health professionals and economists have been calling for a green recovery to stimulate the economy in the wake of the COVID-19 crisis and in the light of this, the organisation believes the pressure is mounting upon the government to deliver.