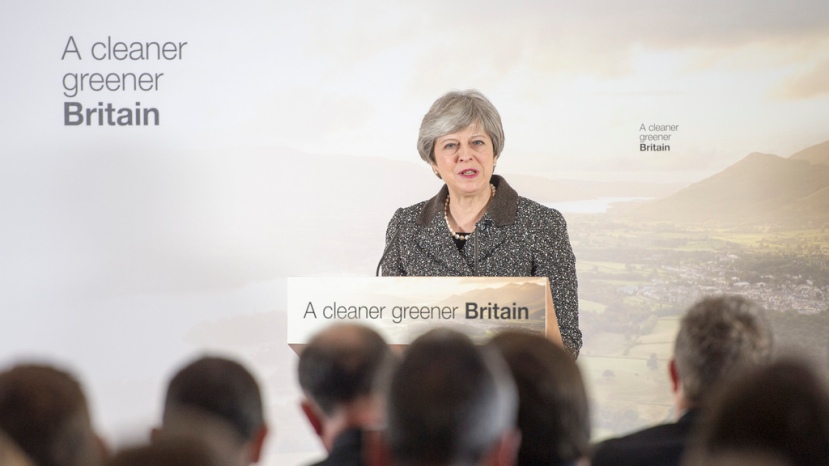 The UK Prime Minister Theresa May has in a green speech delivered earlier this month pledged to make the environment a top priority with a key focus on plastic pollution.

The subject of environmental protection has dropped down the policy ladder in recent years, as the political and public debate has been increasingly focused on the UK’s move to leave the EU. And inevitably much less official attention has been given to environmental protection and tackling climate change. But with the recent green speech given by May, she sought to demonstrate that the conservative government is indeed passionate about dealing with these issues.

Many might be surprised by the speech, as May had never listed climate change and the environment at the top of her priority list. But internal polling in the Conservative party has found that most young voters are very concerned about these issues. At the same time, the much-loved naturalist and presenter David Attenborough’s has in the recent Blue Planet 2 documentary series highlighted the serious problem caused by plastic waste in the world’s oceans and generated much public concern and debate.

The speech unveiled a 25-year plan for the environment, though many green groups said this comes a little too late, and we need urgent action now.

May said that protecting the environment should lie at the heart of conservative values: “The fundamental understanding which lies at the heart of our philosophical tradition is that we, in the present, are trustees charged with protecting and improving what we have inherited from those who went before us.”

The prime minister pledged to eliminate all avoidable plastic waste by 2042, saying that in the future, when people looked back, they would be: “shocked at how today we allow so much plastic to be produced needlessly”. She said she would extend the current 5p charge for plastic bags to also cover smaller shops in England. This has already happened in Scotland and Wales, due to their devolved powers. But apart from that, there were no actual new policies. She said there would be consultations about, for example, introducing a charge for single-use plastic containers such as takeaway boxes, as well as an idea urging supermarkets to introduce aisles without any plastic packaging, and funding research for “plastics innovation”.

But several other policies have already been announced as part of the 25-year plan for the environment led by Environment Secretary, Michael Gove. In particular, he announced the creation of a new 120 miles long Northern Forest between Liverpool and Hull. This plan campaigners have already attacked as hypocrisy, as acres of ancient woodland are set to be felled in the building of the high-speed railway line called HS2.

She also argued that the government’s new Clean Growth Strategy, as well as their Industrial Strategy, would promote green technologies. She claimed that it is possible to adopt free-market policies as well as protect the environment and to continue to fight climate change while growing the economy. She highlighted how important the green economy is to the UK economy “The UK is already home to around half a million jobs in low carbon businesses and their supply chain. “We are a world-leader in the manufacture of electric vehicles. We are the biggest offshore wind energy producer in the world.”

But green groups were not all that impressed. The CEO of Friends of the Earth, Craig Bennett, said that ambition must be higher: “A long-term vision for protecting our environment is essential, but the government can’t keep turning a blind eye to the urgent action needed now to protect our health and planet from toxic air and climate-wrecking pollution.”

And the Executive Director of Greenpeace UK, John Sauveen, also spoke along the same lines: “Having a long-term plan for nature is all well and good, but what we need is serious action here and now. Whether it’s ocean plastics, air pollution or climate change, there’s a huge price to pay for every day that goes by without progress. Plastic production is expected to double over the next 20 years, and traffic fumes are harming our kids’ health for decades to come.”

The Wildlife Trust’s Chief Executive, Stephanie Hilborne OBE, said that it was an important first step, but warned that it is time for the government to act and not just release empty promises: “The PM’s speech shows that, at last, a Government is seeing how much the environment means to people, not least young people.  There are fantastic words and ambitions for land and sea that raise the spirits – but the lack of legal underpinning is a fundamental flaw. What hope can we draw from a promise to return wildlife to our land when there could be a change of mood in a few weeks or months’ time?  There must be an ambitious Environment Act in the next Parliament, or all this is simply the Government saying what the voluntary sector has been saying for a long time.”