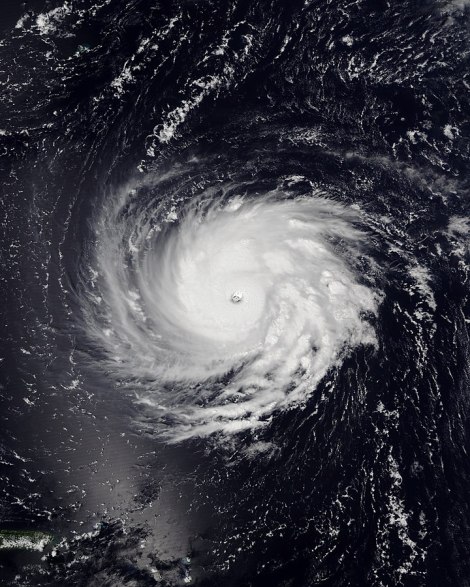 Hurricane Florence as it neared peak intensity near Bermuda on the 10th of September. Photo credit: NASA, NNVL – via Wikimedia.

Last year, three category 4 and 5 Atlantic hurricanes made landfall in the US – the most powerful hurricane season for some time, with many scientists attributing their severity to climate change. And while it is impossible to attribute one weather event to man-made global warming, scientists are beginning to link the severity and frequency of hurricanes to our warming climate.

The 2018 Hurricane Season did look like it was going to be quieter than the 2017 season, but then Hurricane Florence hit hard. It was the sixth named storm of the 2018 season, the third hurricane, but the first to be named as a major hurricane. It peaked on the 4th and 5th of September as a category 4 hurricane, then weakened, and then peaked again on the 10th September to category 4 strength. By the time it had made landfall on the 14th of September though it had been downgraded to a category 1 hurricane. However, the National Hurricane Center (NHC) was quick to stress that this did not make it less dangerous as it covered a larger than normal area, and therefore would cause widespread rain dumping and flooding. 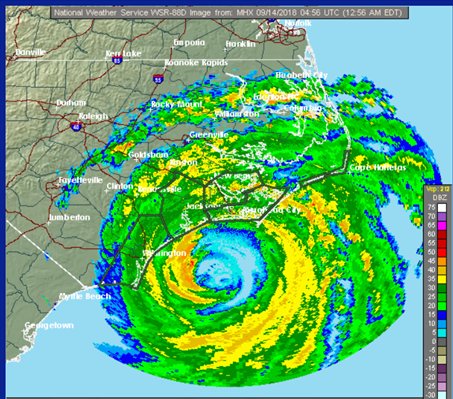 Ahead of the hurricane making landfall, researchers at Stony Brook University and Lawrence Berkeley National Laboratory predicted that the hurricane would bring 50% more precipitation due to anthropogenic climate change; its area was up to 80 km larger in diameter.

At the time of writing Hurricane Florence has claimed the lives of 43 people. In North Carolina rainfall has already broken the state record. Over a million people have been evacuated and one million power failures have been recorded.

There was also potential environmental fallouts as the utility company Duke Energy said they were coping with a coal ash spill which had been triggered by the storm’s rain. The company have further said that a dam has been breached and there’s a serious risk that toxic coal ash could flow into Cape Fear River. This underlines the fact that state regulations have not been designed to withstand such extreme weather events as the state’s environmental codes were written to withstand a 25- or 100-year storm. But Florence promises heavy rains that some regions might not see in a thousand years, straining systems which are meant to keep state residents safe.

Another potential fallout is 62 industrial hog farms within North Carolina’s 100-year floodplain., Environmentalists estimate that if excrement escapes from the lagoons where it is stored it could potentially contaminate drinking water with bacteria like salmonella, which can cause digestive problems, and, in certain vulnerable patients, cause E. coli poisoning. And it has come at a huge cost to livestock as the North Carolina Department of Agriculture stated 3.4 million chickens and turkeys and 5,500 hogs died in flooded farms. Dozens of farms remained isolated with animals unable to be fed. Piles of manure stored at these farms were swept into swollen rivers, about a dozen pits holding animal waste were damaged by the flooding and debris.

Writing for the Guardian, climate scientist Michael Mann said that Hurricane Florence shows the deadly potential of hurricanes in a warming world. He said Hurricane Florence showcased the power of hurricanes as it picked up strength quickly even after having initially weakened. He said it was lucky though that it had decreased intensity by the time it made landfall but said it would still cause massive damage and dump a huge amount of water. He drew a comparison with last year’s Hurricane Harvey which was a category 5 storm, saying that both Harvey and Florence were slow moving – and hence more dangerous than usual. He added that the just 1.5 degree of warming which oceans have already experienced adds 11% of wind speeds to hurricanes, making them 33% more destructive.

As with many extreme weather events, the full human costs and the economic damage will not be known for some time. But what is known is that these super storms are getting more violent and frequent with climate change. And it also exemplifies the insufficiency of a fossil-fuel based energy system incapable of dealing with these hundred or thousands years weather events which we are now seeing with greater frequency.

11 responses to “Hurricane Florence – climate change is making it worse”