Despite increasing prices and evidence that too much beef is bad for health and the environment, the belief that eating red meat makes you strong persists in China, and consumption is accelerating.

Shortly after the Chinese New Year holiday, the business was brisk again at the beef and lamb section of the Xinfadi Wholesale Food Market. Known as “Beijing’s shopping basket”, the market is popular with urbanites looking to pick up cheap fresh food. But according to Li Cheng, who has been selling meat here for more than a decade, the price of beef has been rising almost daily since December.

Figures from the Ministry of Agriculture show that in January and February wholesale beef prices rose over 11% compared to the same period in 2018. Importers have been stepping in to profit.

Until the cows come home

Hao Na, CEO of New Zealand import-export firm Taonga Belt and Road Industrial Park Limited, told me that the rising price of beef is linked to rocketing chicken prices and an outbreak of African swine fever which hit pork supply. But the longer-term cause is simply domestic supply not meeting demand.

Prosperity has fed the demand for beef. By 2017, China consumed 7.94 million tonnes of red meat, more than any other country in the world, but much lower per person than the global average.

China’s farmers haven’t been able to keep pace with growth. Up until 2017 beef farms were usually small-scale operations, with only 2% sending more than 1,000 head of cattle to market annually. These farmers have been discouraged from expanding by rising costs for land, labour and fodder.

The additional demand has been met by imports. Data published by the customs authorities in January put total beef imports for 2018 at one million tonnes, up from just 23,700 tonnes in 2010. A Ministry of Agriculture report predicts a sustained rise in beef and lamb consumption in the coming decade, with beef imports continuing to grow.

Liu Yi, 25, is an aircraft pilot living in Shanghai. He grew up in Xi’an eating the well-regarded local beef but today he often buys imported cuts from the supermarket: “It’s not ideal for making Chinese dishes. But sometimes Chinese beef, from Shaanxi, Gansu or Inner Mongolia, is even more expensive than the imported beef.”

Sergio Ray, foreign markets officer at the Argentine Beef Promotion Institute, made a trip to Beijing last year to advertise Argentinian beef. Hao Na says that while South American beef is slightly inferior to that from Australia and New Zealand, it is plentiful and cheaper, and so is being imported in large quantities.

Many Chinese consumers see beef as a healthy option, according to Jian Yi, founder of the Good Food Academy. He says that after watching the 1984 Los Angeles Olympics, the first to be broadcast in China, many Chinese people concluded that the success of foreign athletes was partly down to consuming more beef and milk.

Zhu Jiajin, a food science professor at Zhejiang University, told me that beef is high in absorbable proteins, as well as micronutrients including iron, potassium and selenium. But studies have also linked red meat to increased risk of heart disease, cancer and diabetes. Zhu Jian suggests wealthier people may be eating too much red meat while those in poorer households aren’t eating enough.

The environmental costs of livestock farming

Beyond its effects on health, beef consumption increases carbon emissions and pollution from farming. In 2006, the UN Food and Agriculture Organisation pointed outthat livestock farming is a major contributor to the greenhouse effect, being responsible for a higher share of carbon emissions than the transportation sector. That was the year that China’s domestic beef production ended six years of growth, with imports then rising to meet demand.

Cattle produce more emissions than any other farm animal. Producing one kilogram of beef releases twice as much greenhouse gases as a kilogram of lamb, and 3.5 times as much as chicken or pork.

South America, China’s main supplier of imported beef, has incurred huge environmental costs. Data from the World Resources Institute shows that beef production is the biggest driver of deforestation. Vast expanses of Amazon rainforest have been felled to make way for pastures. In Brazil alone, three-quarters of deforestation is directly or indirectly linked to livestock farming. Brazil now has over 209 million head of cattle, and 20% of the beef it produces is exported. 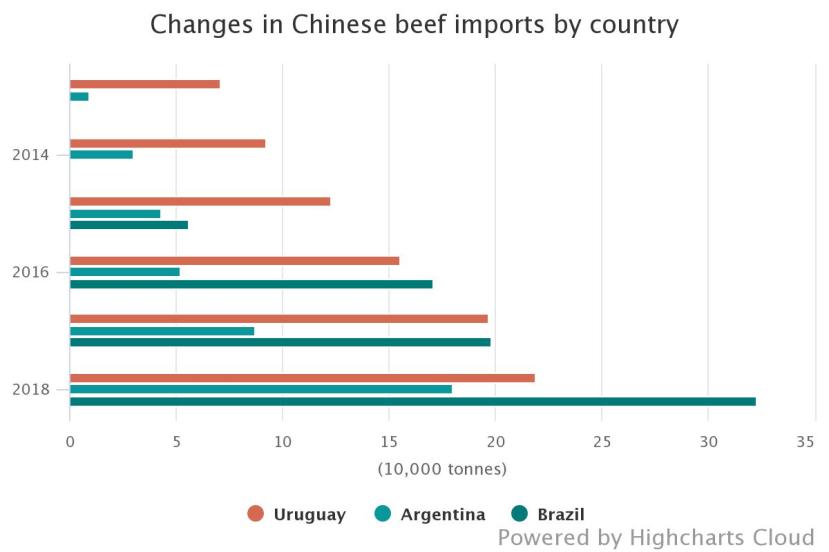 China’s livestock farming sector has tripled in size over the past three decades. This growth has come at a cost. In June 2018 environmental inspectors from the central government found severe breaches of emissions regulations by livestock farmers in Heilongjiang, with large quantities of manure being dumped and badly polluted water discharged directly onto grasslands.

Research recently published in Nature says that if current levels of red meat consumption and processed foods continue as population levels rise, the environmental effects of the food system could increase by up to 90% by 2050, beyond the planet’s ability to cope.

A major report on diet published in the Lancet this January recommended that the bulk of people’s protein should come from plants, with an average intake of red meat of just 14 grams per day. That less carbon-intensive diet would also be more environmentally friendly. In 2016, the Chinese Nutrition Society suggested adults eat 40-75 grams of meat or poultry a day.

But the Chinese public does not seem convinced. In an online poll of 500,000 people about eating beef and health, the most popular answer expressed scepticism about calls to eat less beef: “An average steak is 150g, you’d need to eat it over two days. How’s that going to make us stronger?”

Zhu says that there are plenty of foods which can provide the same nutrients as beef. “If the public isn’t sure exactly what to eat, they should just ensure they eat a varied diet.” But Zhu is refraining from commenting on substitutes such as “artificial meat” which have been making the news recently, saying that even if they have the same nutritional value as beef, they won’t be a perfect replacement: “We still don’t fully understand what’s in beef and what it does.”

For pilot Liu Yi, “Food is a gift from nature. I could eat less meat for the sake of the environment, but there’s no need to eat artificial meat.”