Analysis: How energy sources will change in future…

With the rapid advances in technology, our dependence on energy is greater than any other time in history. Development since the industrial age has been driven by fossil fuels. In fact, almost 80% of the world’s energy comes from fossil fuels. However, in addition to being limited in reserves, they are environmentally damaging because of carbon emissions. The oil price environment is forcing a major change in the oil and gas industry.

With greater awareness of the need to combat climate change, there has been a shift to greener sources of energy. On the other hand, the reality is that about 1.3 billion people do not have access to affordable modern energy.

Therefore the challenge is to provide a sustainable solution for delivering energy to the masses in order to drive development. In future, the energy sources that we are used to today will have evolved to forms that are more efficient and environmental-friendly. This article aims to provide a brief introduction to the changes we can expect to witness in the sector of energy production:

Photovoltaics involves the direct conversion of sunlight into electricity. Wafer-based crystalline silicon is the technology used in the majority of photovoltaic facilities. The drawback is that c-Si cells are the most expensive solar components in terms of initial cost. Also, they have a low absorption coefficient, lower efficiencies and are rigid and fairly fragile. 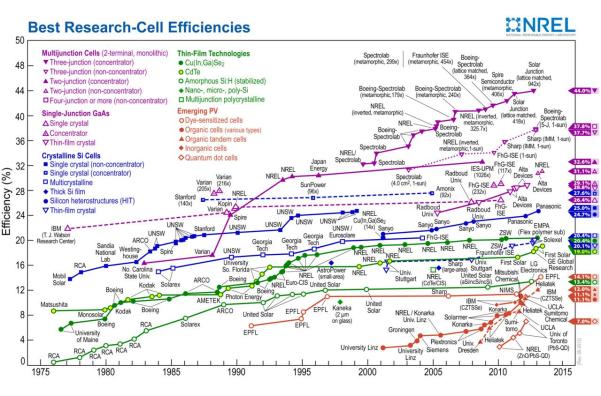 As evidenced by the above graph, research is proceeding in order to enable more efficient photovoltaics.Placing solar panels in innovative locations like bike paths or spaceships that beam energy to the earth are ways that solar energy that is currently wasted can be utilized.

Concentrated solar power(CSP) works on the principle of using solar energy to heat a fluid that in turn creates steam which drives a turbine-generator set. Current fossil fuel powered plants could be converted to CSP plants in future because of the common turbine generation device.

Biomimicry is a method of finding solutions to problems by looking at the patterns and strategies found in nature. Plants use energy from the sun to convert carbon dioxide and water into carbohydrates and oxygen. In artificial photosynthesis, the aim is to convert the water around us into its components using sunlight. The hydrogen produced has a direct application as a liquid fuel or in fuel cells that is already available in new electric cars. Modern day transportation systems, where complete electrification is not practical, are dependent on liquid fuels.

As one of the renewable sources that have become firmly entrenched in the energy landscape, the future advances in this field involves designs that are safer and quieter. Smaller, portable versions that could be available on the mass market could make wind turbines as ubiquitous as solar panels on roofs.

The Beach Lamp pictured here is one of the inventions that aims to illuminate the beach for late night beachgoers.

Nuclear Fusion energy is the nearly ideal energy source. The reaction that powers the Sun. It is the unicorn energy that scientists have been pursuing for decades.

Research into nuclear fusion power receives greater funding than any single rivalling technology. The world’s largest fusion experiment being built at Cadarache in the south of France is now 50% complete, the Iter Organisation announced in December 2017. If the experiment comes to fruition, it could be the key to unlocking clean, limitless energy here on Earth as it is present on the sun.

The field of nuclear fission energy is also undergoing a transformation. Responding to the demand for safer technology, advanced reactors are being designed such that they are safer, cheaper, and more efficient. Imagine warehouse-size nuclear plants that can power entire neighbourhoods. This concept of a different type of nuclear power plant is called small modular reactors (SMRs).

With almost 70% of the earth’s landmass covered with water, hydroelectric power will remain a major contributor to the global energy production. In the past, it has been defined by large-scale projects like the Hoover Dam. At present, the cost of construction of massive dams as well as the environmental impact impedes the development of similar projects.

In recent times, interest has turned to dam-less methods of harnessing the power of water. In run-of-river plants, water force and gravity are utilized to drive the turbine and generate electricity. 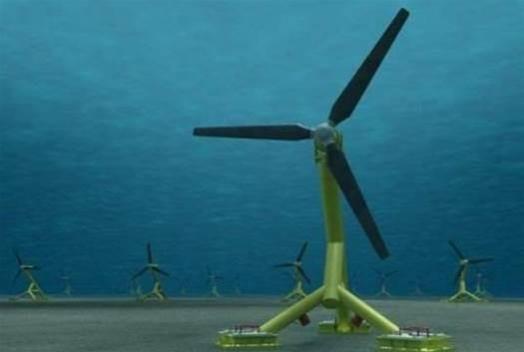 Ocean energy, namely tidal and wave applications has the potential to bring about extreme changes in the energy landscape. Unlike wind or solar energy, tidal energy has a distinct advantage in that tides are predictable. Further, the constant flow and ebb of the ocean tides mean that tidal generators are designed to produce power when the rotor blades are turning in either direction.Wave energy, viewed to be in its infancy, has the potential to tap into the power of the kinetic motion of waves. The need is for designs that are efficient, economical and non-intrusive to coastal ecosystems.

In addition to developing new avenues for power generation listed above, massive changes can be expected in the energy infrastructure. Most countries are currently reliant on large-scale units acting as centralized power generation sources. New renewable energy technology that is being developed requires grids that can handle multiple kinds of smaller-scale input.