Analysis: With or without Trump the G7 moves forward on climate and plastic pollution 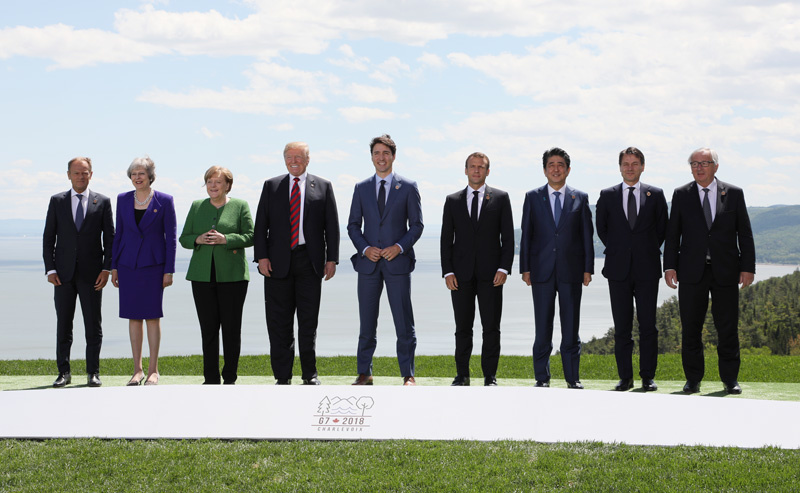 The G7 world leaders and the EU parade for the traditional G7 family photo. Photo credit: The Government of Japan – via Wikimedia CC BT 4.0.

Drama erupted in Canada this month when the annual G7 summit was held in Charlevoix in the French-speaking province of Canada, Quebec. The illustrious club, G7, includes seven of the world’s largest economies, US, Canada, Japan, UK, Germany, France and Italy.

In unusual fashion, as the world has come accustomed to during his presidency, the US President was the architect of that drama. As the two-day summit progressed it became clear there were several sticking points in negotiations that Trump could not agree to, and he conveniently left the summit early just before the focus moved towards climate change and plastic pollution to jet off to Singapore to the much-hyped meeting with North Korean leader Kim Jong-un. The summit convened around a year after Trump controversially announced that he would exit the US from the UN climate treaty The Paris Agreement.

However, it appeared that across the board there had been some agreement and the US had said they would sign up to the G7 Communique. However, on the last day of the summit, the world abruptly woke up to yet another Twitter tirade from Trump, attacking more or less every single world leader at the summit. But the host of the summit, Canada’s Prime Minister Justin Trudeau received the hairdryer treatment with Trump calling him weak and dishonest.

However, the remaining six countries and the EU quickly reaffirmed that they stood by the communique just as the world said they stood by The Paris Agreement when Trump announced the US would exit. And tackling climate change and plastic pollution, albeit at the bottom of the document, was at least given its own section which sets this summit apart from others, where critics had commented on the omission of these critical issues.

The communique outlined that the countries set the path to a sustainable and resilient future that creates jobs and which promotes participation and leadership of young people, specifically young women, through sustainable development. They committed to strengthening energy security while making sure that energy systems drive sustainable economic growth. It did not set out how each individual country should reduce emissions, but it recognised that each should decide how best to achieve a low-emission future. That paragraph is almost taken out of the agreed The Paris Agreement textbook. And on that note all countries, bar the US reaffirmed their commitment to implementing the agreement. They did, however, reach an agreement that part of the path to get there would be fulfilled through innovation, climate finance, energy transitions through market-based clean energy technologies and crucially it acknowledged the role of carbon pricing. A line also included ‘just transition’ which could very well have been argued for by Justin Trudeau as he has lately become under fire for the carbon-heavy path that Canada is taking, with the government having just bought the Kinder Morgan oil pipeline. He might have wanted to ensure that there still should be room for developing fossil fuel based economies. The six countries and the EU said they would promote the fight against climate change through collaborative partnerships and partners on all levels of government, the private sector, global organisations, NGO’s as well as indigenous and remote coastal and small island communities.

A section followed on protecting the world’s oceans saying that they recognize that healthy oceans and seas directly support the livelihoods, food security and the economic prosperity of billions of people. A second document was created, the Charlevoix Blueprint for Healthy Oceans, Seas and Resilient Coastal Communities which they endorsed. They said they will improve ocean knowledge and promote sustainable fisheries as well as support resilient coasts as well as coastal communities and address plastic waste and marine litter. They highlighted though that plastics do play an important role in our economy and daily lives but that the current plastic approach poses a significant threat to the marine environment, livelihoods, as well as human health and therefore the six countries and EU, also endorsed G7 Ocean Plastics Charter.