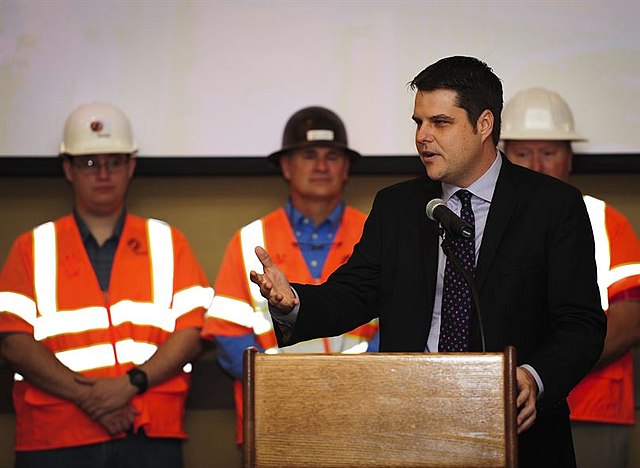 Matt Gaetz, one of Donald Trumps most loyal allies at odds with him on climate change. Photo credit: Senior Airman Meagan Schutter via Wikimedia.

Matt Gaetz, one of Donald Trump’s most loyal allies in the US Congress, took to Twitter last week to make his position on climate change clear. In a straightforward way, he wrote, “ climate change is real. Humans contribute “.

That is a remarkable turnaround for the Congressman from Florida, who had previously been pushing a bill to abolish the Environmental Protection Agency (EPA). He has since joined the Climate Solutions Caucus and said, “I don’t think there’s a scientific debate left to be had on if it is happening. I also think history is going to judge very harshly climate change deniers, and I don’t want to be one of them.”

The tweet from Matt Gaetz came just hours after Trump had again taken to Twitter to voice his doubts that climate change existed.

Patrick Moore, co-founder of Greenpeace: “The whole climate crisis is not only Fake News, it’s Fake Science. There is no climate crisis, there’s weather and climate all around the world, and in fact carbon dioxide is the main building block of all life.” @foxandfriends Wow!

The Congressman represents a district in Florida that encompasses the northern portion of the state’s western coastline, and which is on the forefront of the battle against climate change in the US. This might be the reason why Matt Gaetz has taken a position that human-induced climate change is happening.

However, this opinion has not been matched by his backing progressive climate change policies. The League of Conservation voters gives Gaetz a score of just 7%, and with most of his voting record being judged to be anti-environmental.

And on the back of that tweet, he also thought that the flagship climate change proposal lead by Alexandra Ocasio Cortez and Ed Markey would be too damaging to the economy. He did believe, however, that it deserves to be debated and voted on and he will call for that.

The majority of Republicans in the House and Senate continue to peddle false claims that climate change is not happening. And even if it is, it is a natural phenomenon and has nothing to do with burning fossil fuels. But perhaps Gaetz represents a shift which is starting to happen within the party.